2011 in review: The tangled web of Transatlantic/Omega 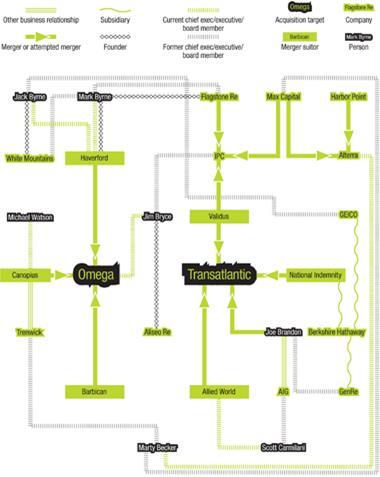 This is part four of our review of the year. Click on ‘Related articles’, right, to read the rest of our look back at 2011.

Mergers and acquisitions in 2011 are best summed up as ‘two’s company, three’s a crowd’. But take a closer look and you’ll find that some transactions bring together a whole host of players.

Global Reinsurance has dug beneath the surface of this year’s most newsworthy targets - US reinsurer Transatlantic Re and Lloyd’s insurer Omega - and found that the various ties that bind these companies speak volumes about the deals themselves.

While there are some obvious connections between companies and people, there are a few surprises. Allied World chief executive Scott Carmilani’s appetite for acquisition did not begin with his bid for Transatlantic, for example.

In fact, he was AIG’s president for the mergers and acquisitions insurance division earlier in his career. No guesses, then, how it felt for Carmilani to take reinsurance powerhouse and fellow suitor Warren Buffett out of the running for Transatlantic.

Once these Byrne connections are tied together, the two seemingly separate acquisition targets of Omega and Transatlantic become quite intriguingly interlinked.

Click on the pdf link, above right, for a closer look at the connections.