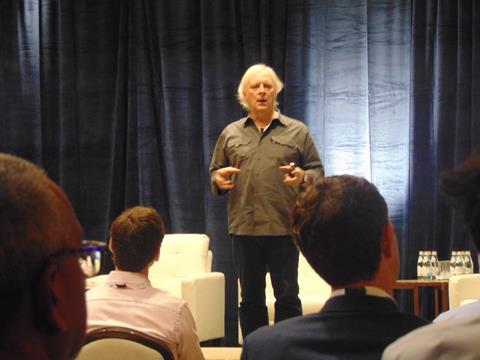 IBM Watson’s chief technology officer Rob High (pictured, right) explained the ways in which AI will be increasingly necessary in a world in which, by 2020, data recorded globally each year will be growing at an exponential rate of 4300%.

“The growth of data in our world is mind boggling. It’s quick to realise that we can’t keep up with it all,” High told GR’s Innovation & Insurtech 2018 event held today in Bermuda.

High noted that smart phone usage would likely rise to only about 7.5 billion devices globally, but that the Internet of Things will lead to increasing volumes of data from some 15bn other non-mobile intelligent devices – washing machines, cars, fridges and TVs.

Amplifying human capabilities to cope with this ballooning volume of big data created each year will be vital, in the same way as imagining how humans could have progressed without basic tools or machinery during previous industrial revolutions.

“Imagine what it would have been like to do that same work without those tools. And that’s the case with data and AI,” said High.

“If we can take AI and augment human cognition, think of the power that brings to the table,” he said.

Only about 20% of data is purely quantitative, High noted, and the remaining – and hugely expanding – bulk of information is in terms of visual or other forms of experience, with which AI is best placed to help, he suggested.

Among a list of other statistics, he noted that some 200 million whatsapp voice messages alone (not texts) are sent, each day.

It is a mistake to see AI as replicating human minds, High emphasised, adding that this would be a waste of time, seeing as there are plenty of people on the planet already.

Machine learning has been around since the 1950s, and deep learning, a subset of it, has already tried to simulate neural structures.

Deep learning could offer a higher percentage of accuracy in picking up all available data within a typical human conversation, High suggested, perhaps 95% accuracy, versus between 70% and 85% for a typical person.

The vast majority of AI is directed towards recognition tasks, High noted, such as recognising language, speech, vision, and human emotions, such as empathy.

“Think about your last conversation with your spouse. How well did you do there, in understanding everything correctly?” High said.

High was keen to underscore the difference between conversational systems available in the consumer market, such as Apple’s Siri and Amazon’s Alexa, and the capability offered by IBM Watson.

“The conversational agent ought to get beyond that first question, to the deeper problem,” said High.

“People often don’t know what question they really want to ask, until they get into the conversation,” he said.

AI should engage with the user, focus on their broader concern, build on an idea, and, finally, “leave the user inspired and satisfied”.

He explained that US firm Autodesk used Watson to transform its helpdesk.