Cat risk modelling should not be a ‘career dead end’ 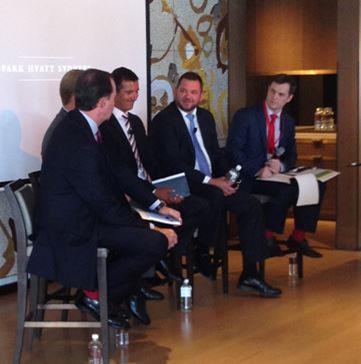 “There should be a career path where you enter as a modeller and end up being a chief risk officer,” he told an audience of RMS clients, collaborators and GR at the Park Hyatt Sydney.

“We have to make young people aware that there is a long-term career path available to them.”

Speaking in a conference room with a view across the water to Sydney’s famous opera house, Jaimes said that this approach required the “education and training of the technical person up to the board level”.

“So, speaking the same language and understanding the technology,” he explained.

The Gaining Confidence in an Uncertain World panel discussion was moderated by RMS senior director of sales for Europe and Asia, Paul Burgess. It featured Aon Benfield’s head of analytics for Australia and New Zealand, Ben Miliauskas, as well as group actuary at Wesfarmers Insurance Daniel Tess and Scott Ryrie of Ryrie Consulting.

The discussion was part of a ‘world tour’ focusing on RMS(one), a real-time exposure and risk management environment designed to enable insurance carriers to manage their risk models, exposures and analytics on a single, open platform. The final stop in this tour will be in Singapore on 18 February.

25 February will be the date of the final beta test of the platform, while RMS(one) version 1.0 is scheduled for full release on 15 April. All RMS catastrophe models will be available on RMS(one) 1.0.

There was much talk about RMS’s first three-peril cyclone model (wind, surge, and inland flood) in Asia, as well as a new Japan typhoon model and the company’s plans to expand to the rest of the West Pacific basin.

However, it was when the discussion turned to the issue of climate change that things got particularly interesting. While all participants agreed that climate change was a real and pressing issue, Singapore-based Ryrie said that is was important that exposure issues and climate change were not placed in the same basket.

“If we confuse the two we’re putting two separate topics into one and we’ll never get a solution,” he said.

“Climate change might make our losses worse, but exposure growth is what’s making our losses much more in dollar terms.

“Economic growth means that there’s more stuff in the way of fire, earthquake, flood and so on. Simple as that.”

Jaimes added that he thought dealing with climate change was about “mitigation over the long term”. “It’s a different time horizon to insurance, which is 12 months,” he said.

Wesfarmers’ Tess said that it was not the case that climate change was “invalidating our experience or models”. “We do need to start thinking from a public policy point of view about how we’re going to respond to the threat of sea level rises,” he added.

Managing director of the independent research centre Risk Frontiers Professor John McAneney raised this issue earlier in the day when he highlighted the need for more research on coastal erosion.

As part of his presentation on the partnership between his organisation and RMS, McAneney discussed the Risk Frontiers models that would be made available on the RMS(one) environment: QuakeAUS4.1, CyclAUS3.0, HailAUS6.1, FireAUS 2.0 and FloodAUS. The Risk Frontiers Australia tropical cyclone model will be operational in the next RMS(one) beta release.

McAneney said that while models were not always right, they did provide “catalogues of plausible events, so can provide exceedance loss statistics with reasonable confidence”.

“Companies should be using scenario output from cat models to examine the sensitivity of their operations to plausible large events,” he said. “[To do this] users need a better understanding of what various models do or don’t cover, and the underlying assumptions.”

McAneney added that insurance premiums were becoming increasingly linked to actual risk. “This will have the socially desirable outcome of helping to drive better land-use planning decisions,” he predicted.

Senior vice-president of business solutions at RMS Dr Claire Souch said that the storm-surge potential along the Pearl River Delta and in Hong Kong was underestimated by the industry.

“This is a region that is experiencing major growth, but much of it is below sea level,” Souch said.

RMS’s typhoon model includes coastal flood for the entire China coastline, and embeds a storm surge model for Hong Kong that takes into account the tides and the flood defences of the city.

“Hong Kong … has a combination of high concentration of exposure at risk, a complex coastline, multi-directional water flows associated with the harbour, and a network of flood defences that require very detailed modelling,” Souch said.