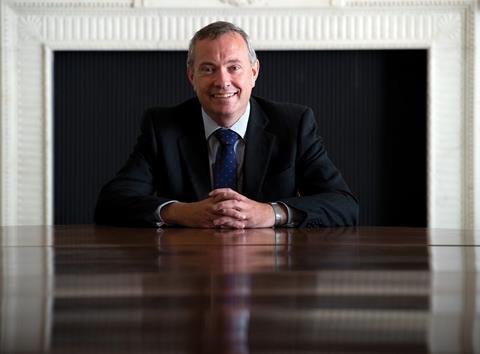 Q How does your role differ from the typical (re)insurance chief financial officers’ role?

A It is probably more similar than you would think. We have our own profit and loss account for the Corporation [of Lloyd’s] itself. It is an organisation with a turnover of some £200m ($325m), and in that sense that is perhaps not unlike the head office function of a big global insurer or reinsurer where the head office will have its own space of operating and providing services to the group.

Where it really differs is that in a group situation one is able to get one’s way through mandate - a memo from head office instructing ‘thou shalt do’. When we want to shift the market in a particular direction, it requires a lot more consensus building and soft-touch influencing than perhaps it would do in a more conventional CFO role, when you can just tell people what to do.

Q How do you manage the assets at Lloyd’s?

A The CFO component of my role has two dimensions to it. One is managing things centrally, the other is providing oversight, direction and strategy for the market. In tax, for example, there is the taxation of the Corporation’s profit and loss account, but there is also agreeing the basis of taxation in some 200 countries and territories around the world as to how the wider Lloyd’s business should be taxed.

When it comes to asset management, on the one hand we have responsibilities to make sure the assets throughout the market, which are held for the benefit of policyholders, are invested sensibly and are properly risk-managed without actually telling the individual businesses how to manage those. At the other end of the spectrum there is about £7bn of assets out of a total of about £50bn on the balance sheet which are directly managed by one of my teams here at the centre.

Q To what extent are you affected by the low interest rate environment?

A If you look at the investment income reported for the market as a whole last year, it was a small fraction of the peak from a few years back. That said, within the central fund, because it is a fund of last resort, we do have the luxury of being able to invest to a longer time horizon, and also it is not quite so constrained by factors like short-term liquidity. It does mean we have a far more diverse range of asset classes.

Off the back of that, we tend to get not only a somewhat higher, but also a more stable, return from those assets. Last year we made 3.9% on the central fund, compared with an average of 1.9% for the market overall, because of our ability to use things like hedge funds commodities, property and so on, which wouldn’t be appropriate within the individual businesses where they need far more short-term liquidity.

Q What are your biggest concerns in the current environment?

A Very much Solvency II. As well as the day job as CFO and my operational responsibilities, I am also the senior nominated person responsible for getting the Lloyd’s market ready for Solvency II.

We are seeking capital model approval for the whole market, but in doing so we have to get the 55 separate businesses in the Lloyd’s market up to speed and ready at the same time. Doing that when many of those businesses are part of groups who have their own Solvency II programmes and timelines makes it that much more complicated. It is taking up the vast majority of my time at the moment.

I think everybody agrees the principles behind Solvency II are sound. However, I worry that the strain it is putting on the Corporation, the market and the UK industry more generally in terms of being able to demonstrate compliance is a distraction from getting on and managing risk. There is a real danger that you end up spending a disproportionate amount of time cataloguing and evidencing your risks and how you are managing them, rather than just getting on with managing them.

Q What effect are delays and uncertainty about Solvency II having on Lloyd’s?

A Almost none whatsoever. The standard formula under Solvency II is simply not tenable for a market like Lloyd’s. There are so many flaws in the standard formula that, if we ended up on it, it would be a serious threat to the viability of the market. From day one we have always worked on the basis that we have to get a model approved. That has meant confidence in our ability to get to that point on time. Until six months ago we believed that time was going to be late 2012 or at worst the beginning of 2013. That was the timeline we set ourselves and we were very much on track for that.

Q What are the most important qualities for a (re)insurance CFO?

A Given the challenges we are facing, it is about not allowing oneself to become so focused on meeting regulatory or accounting demands that you take your eye off what is right commercially, what is right for good risk management and what is right for policyholder protection. It is very easy to end up being a rabbit in the headlights and letting things like regulatory change become an end in itself.