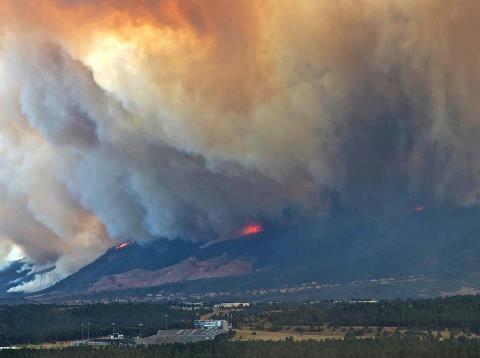 Firefighters are battling a deadly wildfire that is the most destructive on record in Colorado. The fires were exacerbated by unseasonably warm temperatures and windy condition across southern Colorado. On 10 June, Colorado Springs reached 98° Fahrenheit, setting a record for this early in the year.

“The largest of the blazes, the Black Forest fire, doubled in size from Wednesday to Thursday, growing to 15,700 acres [40km2],” said AIR Worldwide senior scientist Tomas Girnius. “The fire is situated about 16km of where the Waldo Canyon Fire burned 347 homes and caused $353m in insurance claims last year.”

On Thursday, powerful winds pushed the fire toward densely populated subdivisions of Colorado Springs, Colorado’s second largest city. This forced the mandatory evacuations of thousands of residents. The latest reports suggest this fire has now been contained, helped by cooler temperatures, calmer winds and a rainstorm that moved over the area on Friday.

“The dry conditions are not limited to Colorado; drought is currently affecting the entire western US, and persistent hot and dry conditions, coupled with the potential of wind and lightning in some areas, have exacerbated overall fire risk,” said Girnius.

Reports showed smoking ruins where million-dollar homes and weekend cabins once stood and AIR estimates that the total value of residential properties within that perimeter is close to $500m.