Counting the cost of Concordia

Losses from the sinking of the Costa Concordia cruise ship could go as high as $1bn, with reinsurers taking the biggest hit 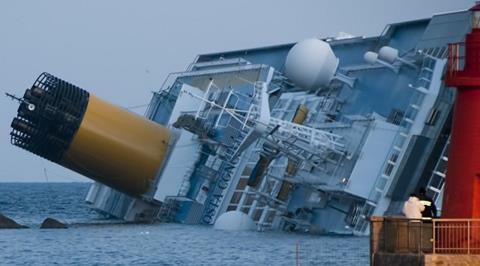 While it is estimated to be insured for up to $513mn, losses from the wrecked cruise ship the Costa Concordia could go as high as $1bn, according to Moody’s senior credit officer James Eck.

Liability claims by passengers, the costs of recovery as well as the potential for environmental liability claims arising from any fuel spillage, the risk of which has increased with poor weather conditions, are all conspiring to push up the final bill.

Investment bank Jefferies International has put the loss at $850m, although it is still unclear if the ship will be a total or partial loss.

This early loss range of $850m to $1bn would seem to stack up. The marine liability underwriter reveals that the liability claim is being reserved at $385m, an estimate he believes to be conservative.

Should the stricken vessel be declared a total loss, the cost of removal of the wreck will fall to the liability insurers.

“The surveyors and lawyers appointed by the hull insurers are currently advising them but I suspect it’s going to be a total loss.”

As of 24 January, crews from Dutch salvage firm Smit International were preparing to remove the vessel’s 500,000 gallons of fuel. The defueling was due to begin on 28 January, but poor weather has delayed the operation.

After defueling, work on removing the wreck will begin. On 3 February, Italian Civil Protection Authority head Franco Gabrielli said the ship would be refloated and removed intact, not cut up for scrap.

The Italian cruise liner, owned by a subsidiary of Carnival Corporation & plc, ran aground on 13 January on a reef off the Italian island of Giglio, just off the Tuscan coast. Latest reports put the number of fatalities at 17 (including 15 passengers and two crewmen), with 16 people still missing.

Passenger claims are likely to be inflated by the cost of accommodation and repatriation.

A lawsuit has been filed in Florida, where Costa Cruises is based, on behalf of 500 of the passengers who are suing the company for $460m. The legal move follows a compensation offer from Costa Cruises of about $14,600 per passenger, plus the cost of their passage home and a complete refund.

Investigations into the cause of the accident continue. Captain Francesco Schettino was arrested on charges of multiple manslaughter, failure to assist passengers and abandonment of the ship. The vessel’s first officer was also arrested.

Reinsurers will be hit harder by the loss than the ship’s insurers, says Moody’s, since marine insurers generally carry significant reinsurance coverage on their marine hull and liability risks with relatively low deductibles. Munich Re says it expects a mid- double-digit million euro claims burden, while Hannover Re estimates its loss to be in the region of €30m ($40m) for the company’s net account.

As the marine insurance market is widely syndicated, losses are expected to be spread widely among primary insurers and Lloyd’s syndicates.

Specialty insurer Lancashire is likely to face losses of between $20m and $30m, according to Jefferies. Meanwhile, Validus says it expects its loss to be in the range of $50m to $65m, based on a total industry loss of $845m-$950m, net of reinstatement premiums and reinsurance. It has additional reinsurance in place if the ultimate industry loss increases.

Other insurers affected by the Costa Concordia loss are Generali, RSA and XL, according to Jefferies.

Coming after last year’s sizable catastrophe claims - including the Japan earthquake and tsunami, which resulted in a loss of $450m for marine insurers, and the Thai floods at the end of the year - this latest disaster is set to further harden rates in the market.

“I think there’s been an initial hardening on the liability side and hull underwriters are pushing for increases almost straightaway,” says the marine liability underwriter. “Brokers have factored that into their renewals as well - accounts that were expiring are now getting five to 10% increases. I suspect that on the hull side people will review how much exposure they’ve got out there on certain larger accounts.”

“The majority of the liability side is generally relatively profitable so I don’t know how much longevity [the rate spike] will have, however significant corrections are being made on underperforming sectors,” he added. “There have been some large marine and energy liability losses and some accounts are being hit hard. In my mind it is important to make that point.”