Europe outputs a quarter of the world’s industrial forestry products, and the forestry sector is vital to many economies, especially those of Nordic countries. In Sweden and Finland, for example, forests cover as much as 70% of the land area, and export of forestry products accounts for more than 10% of total exports and around 5% of gross domestic product.

Fierce extratropical cyclones can devastate vast areas of forest, felling millions of trees within hours. Beyond the initial mechanical tree damage, felled trees are more susceptible to insect infestation and disease; sharp spikes in available timber that result from such mass felling can cause dramatic price drops that affect both the local economy and international trade; and forest damage can cause long-term distress to soil and water ecology, carbon sequestration, and biodiversity, among other economic and environmental impacts. Losses can well exceed a billion euros. 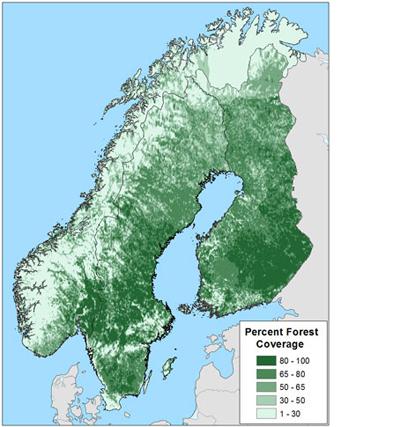 Financial risk management among forest owners varies widely in Europe, as does the availability and demand for private insurance. Even where insurance is available, fire coverage is typically the standard offering, while wind protection may require significantly higher additional premiums, or is not offered at all.

A United Nations Environment Program survey of large reinsurers and insurers around the globe found that less than half wrote forestry insurance, many citing a lack of reliable risk assessment capabilities. Many private forest owners decline insurance, even when available, because they do not rely on their forests as a main source of income, and because public assistance after a storm — to compensate for incurred losses or to assist with cleanup and replanting — is often available. Coverage is virtually non-existent in Switzerland and Austria, around 2% in Germany, 7% in France, and 10% in the UK.

Currently in Europe, only in Norway, Sweden, and Finland is private insurance well embedded into the risk management practices of forest owners. Norway’s mutual forest insurance company Skogbrand — founded in 1912 and owned by its 40,000 policyholders — insures around half of privately owned forestland against wind. In Sweden, approximately 80% of forestland is owned by individuals and private companies, around half of which is protected against catastrophic wind damage. In Finland — where forestry policies cover the expected value of lost timber and, optionally, damage to future growth — around a third of family forests are insured.

Winter storms occur with considerable frequency in Europe, although typically only a few per year are strong enough to cause significant damage to forestry. The largest amount of recorded forestry damage in the Nordic region was in January 2005, when winter storm Erwin damaged an astounding 250 million trees, or 160,000 hectares, in two days. The roughly 75 million cubic meters of damaged timber is nearly equal to the entire annual harvest of Sweden, and economic losses from forest damage were estimated at 1.9 billion euros in 2005 currency. The storm resulted in an estimated 50,000 forestry insurance claims, totaling approximately 275 million euros in insured losses (out of about half a billion euros of total insured losses in Sweden).

During a windstorm, there are two main damage mechanisms that can cause tree failure: uprooting and stem breakage. The stability of the tree depends on the resistance of the root and stem to the applied wind and gravity forces, as depicted in figure 2. Tree characteristics that affect their ability to resist wind loads include height (taller trees are generally more vulnerable), age (older trees are generally more vulnerable), slenderness ratio (broader trees are less vulnerable), and species (as a result of different rupture resistances of their trunks, root anchorage systems and crown characteristics). 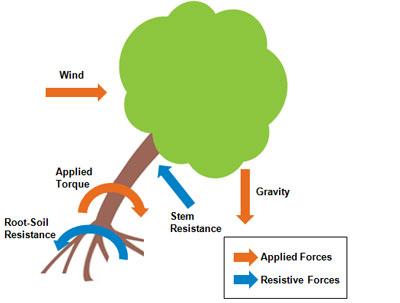 In general, a forest’s susceptibility to storm damage is affected by a complex relationship between wind climate, individual tree and stand characteristics, soil and site conditions, and damage mitigation and forest management practices (figure 3). 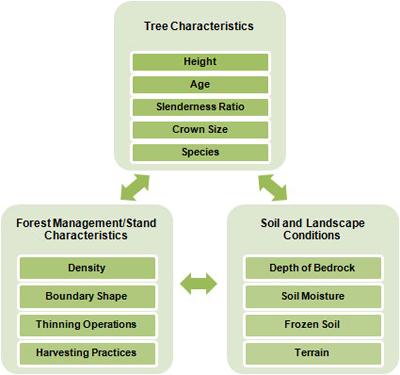 Further complicating the assessment of tree vulnerability is that many of these factors are interdependent. For example, trees have been shown to adapt to the wind climate, so forests in regions that frequently experience more severe windstorms are better able to withstand damage.

Now for the science bit

In recent years, researchers have aimed to isolate the impact of these individual parameters on forest damageability. Using fundamental principles of physics that govern wind and gravity forces, empirical experiments (including tree swaying, tree pulling, and wind tunnel tests) and mechanistic models, it is possible to determine the critical wind speed required to damage a tree within a stand for a given species and location.

The most commonly used mechanistic models — HWIND (Peltola et al. 1999), GALES (Gardiner et al. 2000) and FOREOLE (Ancelin et al. 2004) — estimate the relative vulnerability of the most commonly harvested species of trees in the Nordic region. Consistent with observations, they find that Norway Spruce is more vulnerable than Scots Pine, which is in turn more vulnerable than birch.

Looking forward, a number of studies have concluded that the expansion of private insurance is of prime importance to sustainable forest management, both to prevent deforestation and to protect forest owners and governments against increasing storm losses. Numerous initiatives — both private and public — are underway around the world. An example is a law passed in France in response to winter storm Klaus in 2009 that limits state subsidies for post-storm clean-up and reforestation. In the private sector, a few respondents in the 2008 UNEP insurance survey reported that they are developing new forestry products or tailoring existing ones, and some are exploring alternative risk transfer solutions.

Cagdas Kafali, PhD, is a senior engineer at AIR Worldwide

While research surrounding the influence of a changing climate on extratropical cyclone (ETC) activity is not yet as mature as that of tropical cyclones, scientists are increasingly focusing on examining this very important peril that affects the mid-latitudes of the USA, Europe and other parts of the world.

Some recent studies have suggested that while the overall annual frequency of ETCs may actually decrease in a warming climate, the intensity of the most severe ETCs may be on the rise.

Furthermore, the typical path of these storms over Europe may trend northward, which has important implications for the distribution of insured risk over Europe, including that associated with forestry.