Geopolitical risk to define MENA in 2016 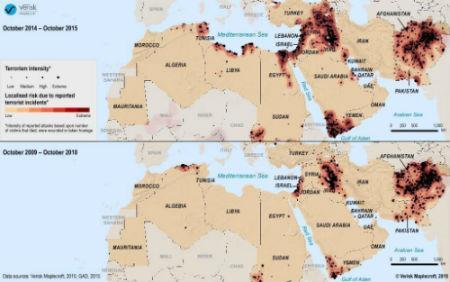 The outlook for the Middle East and North Africa (MENA) region in 2016 is likely to be as bad, if not worse, than the preceding year. Stubbornly low commodity prices are placing the coffers of major regional oil and gas (O&G) exporters – ranging from Algeria to Saudi Arabia – under increased pressure. As the governments of major O&G producers seek to reduce spending and manage public expectations, they will also have to contend with acute regional geopolitical and security risks. These range from the threat posed by Daesh, or Islamic State, to the jockeying between Iran and Saudi Arabia for regional influence and power.

Conciliation between Riyadh and Tehran a pipe dream

The struggle between Tehran and Riyadh could intensify in 2016 following the lifting of western nuclear-related sanctions from the Islamic Republic in January. Iran will be able to assert itself even more strongly in MENA and, despite the low price of oil, have greater financial wherewithal to support its regional proxy forces. The likelihood of a more confrontational Iranian foreign policy is heightened by the need to appease hard-line elements opposed to the nuclear agreement. While the need to attract investment and strengthen the economy may have some bearing on Saudi Arabian and Iranian foreign policy, such considerations are unlikely to eclipse the deep-seated Shia-Sunni divide, which has sustained decades of mutual animosity.

The complete breakdown in Saudi-Iranian relations following the execution of Shi’ite cleric Nimr-al Nimr in Saudi Arabia in early January will also make it even more difficult for foreign companies considering entry into the Iranian market to navigate a host of political and operational challenges. Despite substantial commercial opportunities in a range of sectors, investors will have to contend with a significant compliance burden, high levels of political interference, weak corporate governance and a cumbersome and inefficient bureaucracy.

Opposition to Daesh aside, the absence of common ground between Iran and Riyadh will complicate efforts to find a solution to a host of conflicts in the region – most importantly in Syria, Yemen and Iraq. Rivalry between Saudi Arabia and Iran will also continue to impact the fiscal balance of oil producers throughout the region as the Saudi authorities have shown little appetite to cut production. While protecting market share has been the main driver of Saudi oil policy, Riyadh’s desire to squeeze the Iranian economy will also continue to factor into the House of Saud’s decision-making.

The resilience of Daesh in both Syria and Iraq will increase the risk posed by terrorism throughout MENA in 2016. While the threat posed by the group varies considerably by country, there are few states that are beyond the group’s reach. Among the states bordering Syria and / or Iraq, only Iran and Jordan have yet to experience Daesh attacks on their soil. Figures from Verisk Maplecroft show that, excluding Syria and Iraq, at least 1,269 people were killed by Islamic State in the MENA region in 2015.

Daesh’s reach will continue to extend across the region in large part due to the strong foothold established by local entities that have pledged allegiance to the group in northern Sinai and Libya.

The negative trend is reflected in Verisk Maplecroft’s Terrorism Risk Index 2016, in which Egypt, the country with the largest population in the Arab world, has been moved into the ‘extreme’ risk category. Over the course of 2016, an increasing number of countries are likely to follow a similar trajectory. As highlighted by the map (above), the intensity and frequency of terrorist attacks in MENA have increased markedly over the last six years.

Despite the multitude of local and international participants actively engaged in military operations against Daesh, a credible and viable strategy to defeat the group looks set to remain elusive. Most importantly, the international coalition against Daesh is unlikely to establish an effective on-the-ground Sunni fighting force. Current efforts to cut the group’s revenue streams will not prove decisive in the absence of a coordinated and sustained ground offensive to roll back the group’s territorial gains. Daesh may have made as much as US$600 million from taxation, extortion and confiscations in 2015, underscoring the shortcomings of a strategy that relies primarily on airstrikes.

While the anti-Daesh coalition lacks realistic and effective options to tackle the scourge of fanatical, violent Islam, the region’s painful gyrations will continue to be exploited by radical groups seeking to perpetuate violence and instability.