Guy Carpenter has reacted to the creation of Aon Benfield and the financial crisis by beefing up its management and boosting its analytical advice. Just as important, the team works hard, works well, and has fun. Results are good, the company is growing and it’s also closing in on a 50:50 US/international split 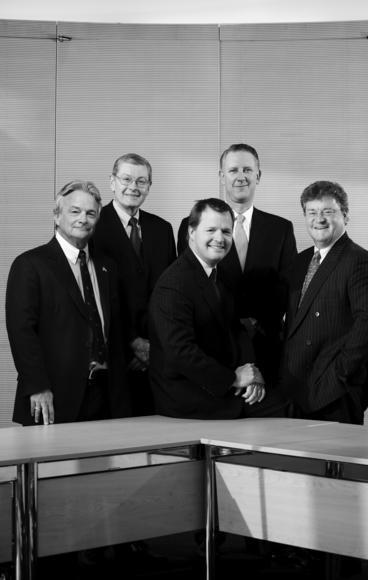 Rumour has it that reinsurance brokers hunt in packs. Some suggest that broking firms only send such large numbers of staff to conferences so as to encircle valued clients and prospects at cocktail parties, and shield them from predatory rivals.

So it was with trepidation that Global Reinsurance joined the entire Guy Carpenter executive committee – all 15 of them, plus a chief of staff and public relations representative ­– for part of their planning meeting at the broker’s UK office near the Tower of London, which it shares with Marsh, its Marsh & McLennan Companies stablemate.

The team has a formidable presence, not only because of its size, but also because the members’ roster reads like a who’s who of (re)insurance.

Commanding the proceedings is chief executive Peter Zaffino, son of Salvatore Zaffino, who ran Carpenter from 1998 to 2006 following the merger with Sedgwick Re.

Strong and confident though the Guy Carpenter executive team now is, one gets the impression that it has had to toughen up after getting sand kicked in its face by a bigger, stronger broker. Aon Re Global, Guy Carpenter’s biggest rival, stole fourth-largest reinsurance broker Benfield from under its nose in November 2008 to form Aon Benfield — a wake-up call if ever there was one.

Since Peter Zaffino took the reins of Guy Carpenter in February 2008 from David Spiller, who had succeeded Sal two years earlier, the company has been focusing its energies on top-line growth, bolstering its sales-driven culture and building up in areas where it was historically weak. Zaffino says there have been many changes at the firm since he took over, and admits that the Aon Benfield merger was at least part of the reason.

“What happened externally forced some of these changes and made us think about what we wanted to do on an expedited basis,” he says. “When Aon and Benfield came together it created an international broker that was roughly three times our size, excluding the USA, so there were things that we needed to put in place immediately in order to compete effectively.”

The sentiment is echoed by Britt Newhouse, who became Guy Carpenter chairman on the day that Zaffino was made chief executive and, like Zaffino, has been with the company since 2001. According to Newhouse, while Guy Carpenter is strong in the USA, it has ambitions to derive half of its business from outside the country.

“It’s no big secret that we were interested in making acquisitions in the international business, which would have probably brought us close to the 50:50 mark pretty much overnight,” he says. “Our alternative was the eventual outcome, which would put us on the offence all the time. And we are on the offence, especially in Europe, the UK and Asia, much more often than our major competitors. That is an opportunity for those already in the firm or those that are joining: aside from having the nice platform and all the tools, our team sees it as a real opportunity to be on the offence more often.”

The Aon/Benfield merger highlighted the fact that Guy Carpenter had work to do in bolstering its European and UK operations in particular. One broker source described the old Guy Carpenter as “easy to beat” in Europe. The company itself clearly agreed: over the past 12 months, it has overhauled its European and UK operations, which has involved shedding several employees – some suggest around 60.

“We felt we had to make some changes in our organisational structure and changes in some of the people within the organisation. Those decisions weren’t easy, but they were necessary to drive change and ensure we could grasp opportunities,” says Keeling.

With the European restructuring complete, the company has set about bolstering the division with talented staff from its rivals. Notable recent hires include chief executive of Cooper Gay’s operation at Lloyd’s, Jim Summers, who Carpenter poached to run its global marine and energy division, and Willis Re’s Colin Kiddie, who Keeling says has accepted the position of co-chairman of Carpenter’s global specialties business in France.

The formation of Aon Benfield was not the only trigger for change at Guy Carpenter. The onset of the global financial crisis in 2008 has also influenced development since Zaffino took the helm.

“There was a confluence of events affecting the financial markets, which shifted client demand from brokers towards strategic advisers, and away from simple placement of reinsurance,” Zaffino says.

As a result, the broker is putting more emphasis on its analytical offerings from its Instrat unit, which include the risk and capital allocation tool MetaRisk, and the i-aXs exposure management platform. While these tools can be combined with the reinsurance products for which brokers are better known, this is not always the case.

“Often they are offered independently of reinsurance as part of the corporate governance or management practices we bring to the client,” says Chris McKeown, president and chief executive of Guy Carpenter’s North American broking operations. “Reinsurance is our bread and butter and we are always looking for meaningful and efficient ways for clients to buy reinsurance, but the platforms and the capabilities that we deliver and transfer to our clients are often as valuable if not more valuable to the overall relationship and strengthening our position with our clientele.”

Guy Carpenter’s strategy appears to be paying off. Despite challenging market conditions, characterised by falling reinsurance prices and declining demand for insurance and reinsurance products, the company is growing. The broker’s nine-month 2010 revenues of $791m were 8% up on the $731m it brought in during the same period the previous year.

Carpenter attributed 5% of this growth to acquisitions and 1% to currency effects, leaving an underlying organic growth rate of 2%. In the third quarter alone, organic growth was 3%.

“Over the last few years we have been able to grow both organically and by acquisition, despite a shrinking pie,” says chief financial officer Paul Malvasio. “While we have grown the revenues, we have also increased our overall margins, which is quite an accomplishment when you think about what the last three years have been like in any industry.”

Although it has bolstered its position, Guy Carpenter faces several challenges, including differentiating itself from its main rivals. Guy Carpenter is not the only one of the big three to notice the greater demand for consultancy services and so emphasises its advisory capabilities alongside more traditional reinsurance placing services. Aon Benfield, for example, describes itself on its website as a “trusted advocate” and trumpets its $100m+ a year investment in analytics. Willis Re, meanwhile, now describes itself not as a broker but as “one of the world’s leading reinsurance advisers”.

Zaffino is dismissive of other brokers’ efforts, however. “It is easy to point to having portfolio management tools. It’s easy to say you have the full array. But can you execute? Can you really drive the solutions for clients?” he asks. “We have a collaborative global structure. Our competitors say the same thing, but their structures appear to be more siloed and don’t support collaboration as well as ours.

“Our global infrastructure is defined by sharing best practices, working together and finding ways to use the expertise of the organisation irrespective of where you are in the world. We do that, and that is unique.”

Priebe adds: “What really differentiates us is the fact that we work incredibly well together. We have fun together. We work hard together. That is seen and felt by our customers and our prospects, and that is why we are winning; that is what is going to enable us to continue to win for our clients.”

As Guy Carpenter is bulking up, in part by acquiring smaller businesses and poaching teams and individuals from rival firms, maintaining this cohesiveness is a challenge in itself. Zaffino contends this is possible through careful selection.

“We have passed on acquisitions and hires where we did not feel we could integrate them into the culture and create a team environment,” he says. “We are not just going to bring in revenue to grow at the expense of teamwork, because that would undo what we have worked so hard to build.”

If it is to see off its rivals and achieve its aim of a 50:50 US to international split, Guy Carpenter must also maintain growth in a declining market. To this end, the company sees opportunities for new business where brokers have typically not played.

One target is continental Europe, where the trend in some countries, particularly Germany, is to buy reinsurance from source rather than through brokers. While acknowledging this will be tough to crack, not least because of the longstanding nature of the direct cedant/reinsurer relationships in these areas, Keeling believes brokers’ offerings can benefit buyers.

“First, we bring technology, analytics, consultancy and advisory services that the direct writers either don’t or can’t bring today,” he says. “Secondly we have global resources and networking that we can apply in a more seamless manner than most of the direct writers.”

He adds: “The broker market share around the world is increasing incrementally. That is happening for a reason: the broker brings a greater value to the client than the direct writers ultimately do.”

The European Commission’s forthcoming Solvency II capital adequacy directive is also helping Guy Carpenter break into direct relationships. “A lot of the small- and medium-sized mutual companies are beginning to ask whether they should widen their network of professional advisers, and that is invariably bringing us into a conversation,” says Guy Carpenter’s chief executive of European operations, Nick Frankland. “We have had a couple of notable successes in Germany recently on just that case.”

Another typically broker-free area that Guy Carpenter is aiming to break into is life reinsurance. In September, the company hired former PartnerRe life reinsurance head Franck Pinette as chief executive of European life reinsurance, reporting to Frankland. As in non-life, consultancy and advice around Solvency II is proving a way in for the broker.

Guy Carpenter has not yet reached its 50:50 goal, and though Zaffino will not be drawn on when it will happen, he says progress is being made. He attributes most of the 3% organic growth seen in the third quarter to international operations.

While Guy Carpenter missed out on buying Benfield, Zaffino denies that the company needs to buy its way to international success.

“Never say never, but we don’t need to do an acquisition to be successful and execute on our strategy,” he says. “We think we can continue to grow organically and make the right investments to be able to add value to clients by providing fully integrated solutions. Doing that well will give us opportunities for growth over time.” GR