A 3% drop in total global reinsurance capital in 2018 needs to be taken in the context of nearly 30% capital increase since 2011, according to Aon

Reinsurers have weathered the storm of the past couple of years of catastrophe events, and the industry remains strongly capitalised, according to Aon.

Looking to June and July 2019 renewals, the reinsurance broker expects sector will continue to find adequate supply in the aggregate.

A 3% drop in total global reinsurance capital in 2018 needs to be taken in the context of nearly 30% capital increase since 2011, according to the April 2019 edition of Aon’s “Reinsurance Market Outlook: Supply Weathering the Storm”.

Reinsurers continue to offer coverage and terms to insurers that show that reinsurance capital is weathering the storm of the prior few years’ catastrophe events, Aon said.

“Alternative capital remained strong for the year and is expected to regain momentum as losses are developed and finalized; collateralised reinsurance specifically continued to make up more than half the total capacity provided,” the reinsurance broker said.

“The proportion of the losses accruing to reinsurers has been relatively low, given the profile of the underlying events and the high retentions carried by large primary insurers,” the broker said.

Furthermore, the reinsured portion has been spread around a much broader pool of investors than has historically been the case,” Aon added.

The graph below shows the change in global reinsurer capital since 2006. 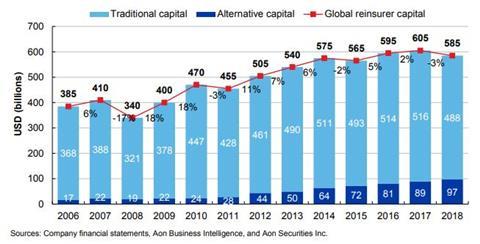 After a surge in late 2017 and early 2018, headline growth in alternative capital has slowed, as the continuing entry of new funds has been partly offset by losses from catastrophe events and redemption requests from investors, according to Aon.

The total of $97bn at December 31, 2018 is shown gross of collateral trapped on contracts impacted by the major natural catastrophe losses in 2017 and 2018.

Aon said it expects growth to continue once this area of the market has fully digested the losses incurred over the last two years.

“Many long-term investors have made good returns over time and the strategy of investing in insurance risk for diversification purposes in a low interest rate environment remains valid,” the reinsurance broker said.

“Catastrophe bond issuance totalled $9.7bn in 2018, making it the second most active year on record. Total limit outstanding is at a record high of more than $30bn band further high levels of activity have been seen in the first few months of 2019,” the report added.

The rise in alternative capital deployment since 2002 can be seen below.