Underlying RoE fell to 2.7% as an average across  reinsurers writing natural catastrophe risks in 2018, just part of a “relentless decline since 2013”

The total shareholders’ equity of the 32 reinsurance companies tracked by Willis Re’s reinsurance index was down 10% at the end of last year.

Willis Re pinned the fall on the exits of Validus and XL Catlin, both through merger deals.

The reduction was the largest component of a 5% fall in total capital dedicated to the global reinsurance industry at year-end 2018. That total capital figure had fallen to $462bn at the end of last year, Willis Re reported.

The second largest component within the overall figure is alternative capital which grew by 6%, in contrast to the drop within the index group of traditional underwriters of reinsurance.

Reinsurance companies paid out a great majority – some 86% – of their $20.5bn of net income as dividends and share buy-backs, which together reduced the index capital by $17.6bn.

Reinsurers’ underlying return on equity (RoE) “has seen a relentless decline since 2013”, according to Willis Re.

For the subset of natural catastrophe reinsurers, reported RoE for the subset studied by the broker recovered from 2017’s 1.4% to 4.2%, attributed to the heavy cat losses sustained in 2017.

Normalising for a 4% nat cat loss and removing the benefit of reserve releases resulted in an underlying RoE of 2.7% for the subset versus 3.8% RoE in 2017, Willis Re reported.

The slump in RoE can be seen in Willis Re’s chart, taken from the report, below.

The main driver of the improvement in reported RoE for the subset, and drop in underlying RoE, was the combined ratio, the reinsurance broker found.

Kent added: “The report’s findings show that the remedial actions taken by many risk carriers in 2018 were essential and we are seeing an acceleration of these actions in 2019 as companies seek improved underwriting terms and rates to drive RoEs.”

Chart: RoE for the index of reinsurers and subset of nat cat reinsurers. Source: Willis Re. 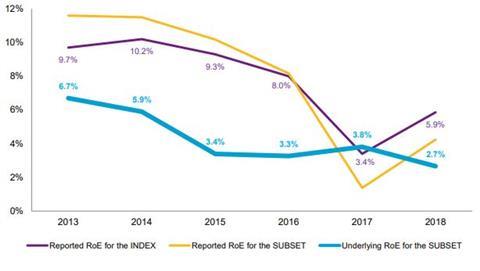