Dorian provides the pre-Monte suspense for 2019

Currently lashing out on the Bahamas, Hurricane Dorian could be about to provide one of the most dramatic hurricane landfalls in recent memory, as it slowly winds its way westwards, towards the US coastline.

Or, if the weather gods allow, the US coast could dodge the worst of the category-five Atlantic storm; it’s still too early to call – not so for the Bahamas, which has taken a battering, that much is clear.

Dorian’s potential movement endangers the US south-eastern coast from Florida to the Carolinas, with just a week to go before the Monte Carlo rendezvous, to discuss reinsurance renewals prices for billions of dollars of US property catastrophe-exposed insurance business.

President Trump’s Mar-a-Lago private club is under a mandatory evacuation order, and Trump cancelled a planned trip to Poland because of the imminent threat.

The storm could yet affect a large swathe of the US eastern seaboard, from West Palm Beach to Washington, DC. (Trump erroneously suggested Alabama could be hit, prompting a correction from the US National Weather Service.) 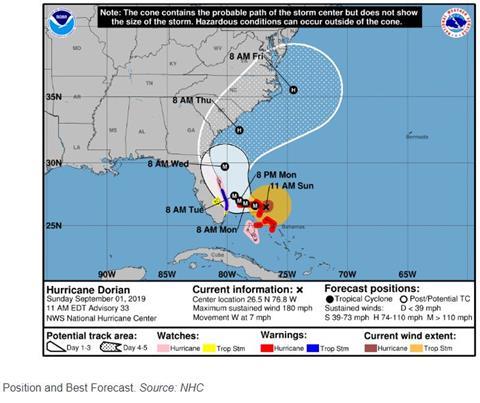 Dorian is already the second strongest Atlantic hurricane on record, behind Hurricane Allen from 1980.

Dorian strengthened over the weekend to arrive directly over Great Abaco Island in the Bahamas on Sunday evening, some 205 miles east of West Palm Beach.

It brought maximum sustained winds of 185 mph, easily enough to make Dorian a Category 5 on the Saphir Simpson hurricane scale.

It also makes Dorian is the strongest hurricane to ever hit the Bahamas, according to an update from catastrophe risk modeler RMS.

The next most powerful storm to hit the islands was Hurricane Andrew in 1992.

“With the storm stalling over the Bahamas, Abaco and Grand Bahama will be exposed to unprecedented wind gusts over a prolonged period – the effects are expected to be devastating,” RMS said.

Dorian has brought rainfall in excess of 20 inches to the Bahamas, and hurricane-strength winds extending 45 miles from its centre.

“The bathymetry allows the storm surge to build up offshore and the islands are not protected by the type of mountainous terrain that you see on other Caribbean islands,” RMS said.

Guy Carpenter’s blog said: “The Northern Bahamas Islands are experiencing a storm surge of 15 to 20 feet above tide level in areas of onshore winds, coupled with destructive waves, rainfall in excess of 20 inches, and hurricane force winds.” 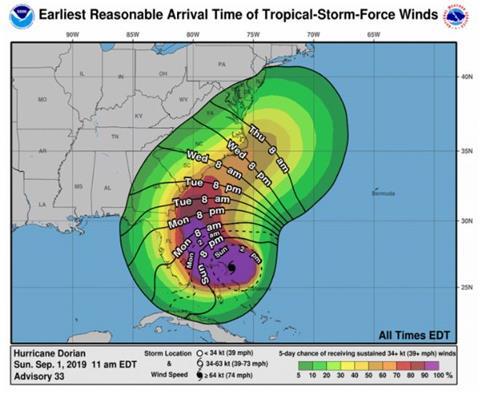 Much uncertainty remains, as the timing of a turn northward will determine its potential US impact.

The NHC forecast keeps Dorian it as a major hurricane (category 3 or higher) throughout its 72-hour forecast.

An analysis by RMS of five historical Florida storms similar to Dorian revealed a mean insured loss of $22.7bn (from a range of $11.3-37.2bn), updated for 2019 exposures.

Dorian could yet travel along but just off the US east coast before it dies down, just as reinsurance buyers and providers begin their renewals chatter in Monaco’s swanky salons and the Café de Paris.

The US National Hurricane Center (NHC) best forecast continues to keep Dorian offshore of Florida, however the latest model runs support Dorian approaching more closely than previous forecasts, which would significantly ramp up its cost.

“Although the official forecast does not show a landfall in the Continental US, the level of uncertainty is very high and a landfall anywhere from Florida through the Carolinas is still a distinct possibility,” Guy Carpenter said.

Model track guidance has necessitated a shift to the west in the NHC best track estimate, according to the broker.

“The European Model below illustrates the consensus in track forecast for the next 12-24 hours as the storm is being steered slowly west by a high-pressure ridge to the north,” said the blog.

“A weakening of the ridge and a slowing down of the system has been forecast for the past several days, however models are maintaining westward motion for slightly longer than previous runs, which brings Dorian closer to the Florida Atlantic coast.

“The 51-member ensemble suite of tracks show varying scenarios, including landfalls in Florida, Georgia and the Carolinas, although the mean of the ensemble remains offshore,” Guy Carpenter said.

Data from satellites, instruments and models continues to update.

“Each model run today and tomorrow should bring increased clarity to the ultimate path and progress of the storm,” Guy Carpenter added. 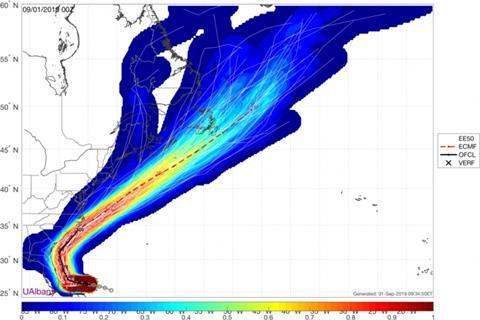