Swiss Re has published its summary of catastrophe loss activity for the first six months of the year.

For natural and manmade disasters, the insured portion of $19bn compares with global economic losses of some $44bn.

Some $40bn of the economic loss came from natural catastrophes; while $15bn of the $19bn insured figure arose from nat cats.

This year’s economic loss total is well below $109bn, the average first-half economic losses of the previous decade.

It is also lower than the losses of $51bn reported for the same period a year earlier (see statistics taken from Swiss Re’s report, below).

This year’s $19bn insured sum is also down from $26bn in the first six months of last year, according to Swiss Re Institute’s preliminary sigma estimates.

Disaster events claimed more than 5,000 victims in the first half of 2019, the reinsurer reported.

Only about 42% of the global economic losses were insured (compared with 52% in the first half of 2018) as several large-scale disaster events, such as cyclone Idai in southern Africa and cyclone Fani in India, occurred in areas with low insurance penetration, Swiss Re said.

Cyclone Idai, which caused strong winds and severe flooding across Mozambique, Malawi, Zimbabwe and Madagascar, was the deadliest natural catastrophe in the first half of this year, claiming more than 1,000 victims.

Economic losses from cyclone Idai are estimated at least at $2bn, only about 7% of which was insured.

Martin Bertogg, Swiss Re’s head of catastrophe perils, said: “The experience of the first half of this year has once again exposed the existing protection gap issues in emerging countries.

“Similarly, the nature and location of the events underline the theme of secondary perils taking a larger share of the overall loss burden, as we analyzed in more detail in our last catastrophe sigma,” Bertogg added.

The main drivers for this year’s insured nat cat losses were thunderstorms and flooding events in different parts of the world, Swiss Re said.

Secondary perils such as thunderstorms, torrential rains and snowmelt caused the highest losses through wind and water damage in the first half of 2019.

These losses happened in many regions of the world, Swiss Re noted, including the US, Canada, Europe, Australia, China and Iran.

Swiss Re Institute’s sigma estimated the total economic losses of these events at $32bn, and approximately $13bn of these losses were insured.

As in the first half of 2018, several parts of the world also experienced heatwaves and dry weather conditions this year, with temperature records broken in several locations, particularly in Europe.

The full impact of the extreme summer weather is yet to be determined, the reinsurer said.

Bertogg added: “Intense heatwaves and dry spells of the like we’ve seen over the last few years are expected to become more frequent, exacerbating the conditions conducive to wildfires and agriculture losses.

“We also expect more variable rain patterns, as rising temperatures load the atmosphere with more vapour. Society will need to adapt and prepare for these increasing occurrences.” 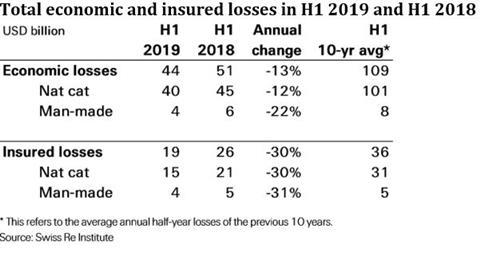 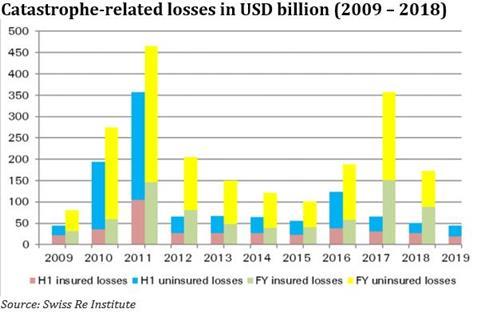