The loss creep goes on, as decline in ILS volume continues into Q2 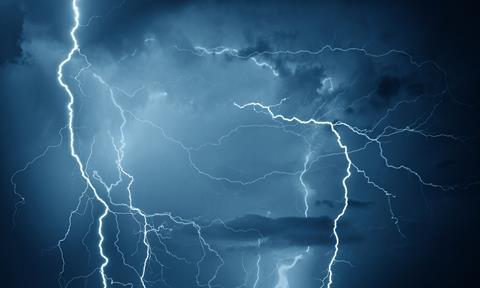 The bumper catastrophe season of 2017 continues to dog the insurance linked securities (ILS) market, which declined in the first six months of 2019, according to Willis Re Securities.

The report, called a “slow return to normal” emphasised that the loss creep has slowed from the same point a year ago, with 2017 claims now nearer to conclusion.

Catastrophe bond losses arising from the 2017 Harvey, Irma and Maria (HIM) hurricanes, California wildfires, and the Chiapas earthquake reached an estimated $755m at the end of Q2 2018.

That was roughly 3% of the $25.1bn of widely distributed non-life cat bond capacity outstanding before hurricane Harvey, said the reinsurance broking arm of Willis Towers Watson.

A year later, the total 2017 loss under cat bonds reached slightly more than $1bn, or 4.2%, reflecting nearly a quarter billion dollars of loss creep, and a year-on-year rise of about 40%.

“Much of the market has recalibrated models and thinking to accommodate loss creep, and is closely watching the commencing wind season to set the tone for the year ahead,” Willis Re Securities said.

That made the recent quarter the second-lowest second quarter for issuance by volume in the past eight years, except for 2016, Willis Re Securities said.

As in the first quarter, staple US wind-focused deals dominated issuance, including $650m of pure coverage for the peril issued across three cat bonds, and $1.04bn for peak multiperil protection, according to the broker.

The US Federal Emergency Management Agency again reinsured its National Flood Insurance Program through Floodsmart Re, which covers named-storm-related US flood events with $300m capacity.

In addition, four cat bonds were issued to provide more than $1.8 billion in cover for mortgage insurance risks.

The report led by dissecting the industry cliché of reinsurance being a “relationships business”, implying that cat bonds, ILS and the broader collateralised reinsurance market is a purely transactional environment.

In this year’s first half, the report stressed that reinsurance relationships were valuable to insurers seeking reinsurance coverage.

In many cases, cedants’ programmes were renewed at the typical “4/1, 6/1 and 7/1” dates without the same level of ILS participation as in the past, Willis Re Securities noted.

Companies with multi-year capacity and with breadth in their traditional reinsurance partners and ILS investors did well, the broker said.

“They did even better if they had some diversity in how they interacted with investors and reinsurers between traditional quota shares, syndicated XOL reinsurance and cat bond-backed layers,” said the report.

In contrast, cedants lacking relationships with long-time reinsurers, buying only single-year capacity, and with too high a component of purely transactional capacity, “tended to suffer a little”, the broker offered.

The more relationship-oriented investors and reinsurers were reluctant to let go of programmes and partners they had worked hard to court, even if pricing and terms and conditions “did not meet their wish list or what was on offer from alternative places to deploy capacity”, the report suggested.

“Things are slowly returning to a more normal ILS environment, but relationships will still matter over the next six months if cedants are to get the protection they need at sensible pricing, terms, and conditions,” said William Dubinsky, head of ILS at Willis Re Securities.

“The contracting ILS market required cedants to look elsewhere for capacity during the recent renewals. Those with at least some relationship-based treaties with long-established reinsurance partners on their books found it easier to plug the gaps, relative to those who buy reinsurance on a purely transactional basis,” Dubinsky said.

“That is likely to be the case for the balance of the year at least. Both approaches have merits, however, and the ideal balance will be different for each reinsurance buyer,” he added.

See below for a screen grab of the Q2 ILS figures, as published by Willis Re Securities. 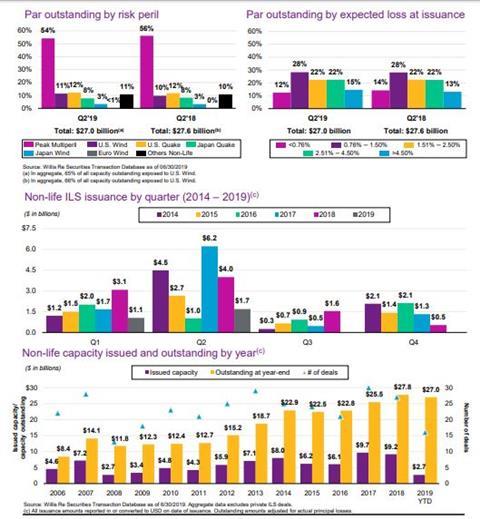