How cat models are evolving

Recent catastrophes have shaken up Asia’s (re)insurers, but firms are now coming up with highly advanced cat models 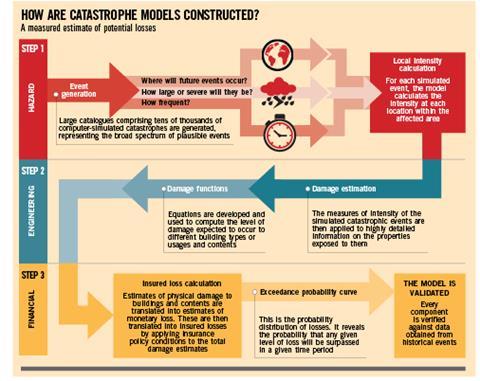 With catastrophes costing the industry more than $120bn, 2011 wrought losses on an unprecedented scale. Disasters in Asia such as the Tohoku earthquake and tsunami, and the Thai floods were responsible for much of this total.

Compounding the problem for insurers was the fact that the events were either unexpected or unmodelled. So, unsurprisingly, following these Asian catastrophes, insurers were critical of the cat models for not accurately mapping their potential exposures.

Since those events, both Risk Management Solutions (RMS) and AIR Worldwide have released updates for their Japanese earthquake models.

The quake yielded a vast amount of ground-motion data, damage observations, and detailed claims data now incorporated into the new models. The models claim to give a wider view of uncertainty, a new view of post-event seismicity and the capability for clients to manage tsunami accumulations.

RMS director, model solutions, Neena Saith says: “There were models for the Tohoku earthquake, but that event revealed sources of risk that had not been thought possible. It highlighted the potential for high-magnitude earthquakes.”

“In 2012 we updated our Japan earthquake model to incorporate a recharacterisation of the hazard. Changes to event rates, new seismic sources and large-magnitude earthquakes were added to the stochastic event set.

“The Tohoku earthquake also demonstrated that tsunami can be a significant driver of losses, which we also saw to some extent with the Chile earthquake in 2010. Tsunami has since been a big focus in the modelling industry, and understanding the risk of tsunami is a key priority for many of our clients.”

The modellers say they are not only updating their existing models, but are also focusing on building modelling solutions for some of those missing sources of risk. For example, RMS is currently building a probabilistic flood model for Thailand. This takes time, so in the meantime it is providing a simpler solution from next year.

Saith says: “It will map flood risk in the Asia region in combination with some exposure databases. The goal of those solutions is to help clients better understand where their exposure might be located in terms of high-risk hazard areas.

“The Thai floods really highlighted emerging risk concentrations in Asia. Those floods affected several industrial clusters, which came as a surprise to the insurance industry, particularly given the CBI that resulted from the event.”

Again, the modellers say they are building models that will incorporate CBI claims, and are providing interim solutions.

AIR Worldwide senior vice-president of research and modelling Jayanta Guin says: “We do not have a model per se, but where the data is available we can analyse the supply chain risk for an individual company or a group of companies. This is an evolving area of research for us. To understand supply chain risk you need more exposure data.

“Exposure data has improved a lot since the early days of catastrophe modelling. In Asia there are certain countries where it has improved, but there is room for more improvement in exposure data quality.”

Much of the criticisms aimed at the models following the catastrophes of 2011 centred on a perceived lack of transparency. So, how have the modellers addressed this issue?

Guin says: “We have been very explicit with our clients on what a cat model includes. In terms of non-modelled risk we have made a commitment to keep making our models more comprehensive.

“The other aspect of transparency is to make sure our clients fully understand the model’s inherent limitations. We are doing this through documentation and providing more visibility into the guts of the model through our new platform Touchstone.”

And it is through these new platforms, Touchstone from AIR and RMS(one), that modellers are giving their clients the tools to build their own view of risk.

Saith says: “The concept of transparency is one of the features within the framework of RMS(one). It lets companies test loss sensitivity key assumptions in the model and also make adjustments to the model based on their own data, their own knowledge and their experience. By doing that they can reflect their own business risk profile to a much greater degree.”

Developments in the use of big data help understanding of exposure.

Saith says: “There are solutions to store data, but there is very little available to analyse the data. RMS(one) is really going to provide the functionality to drill down into the data and gain insights that until today have not been possible.”

And, of course, modellers are not just learning from events in Asia, they are also using information from recent catastrophes such as Superstorm Sandy and applying it to Asian models.

Saith says: “With Sandy we saw that storm surge can really drive the losses. It highlighted the need to use a fully physical model for storm surge that has the capability of capturing the full lifecycle of the storm, rather than just the characteristics at landfall.

“In 2011 we implemented a high-resolution physical storm surge model in the US that was shown to capture the localised nature of flooding and damage after hurricane Sandy. Now we are taking that modelling capability and implementing it in Hong Kong for the update of our China typhoon model in early 2014, and also incorporating it into our Japanese typhoon model.”