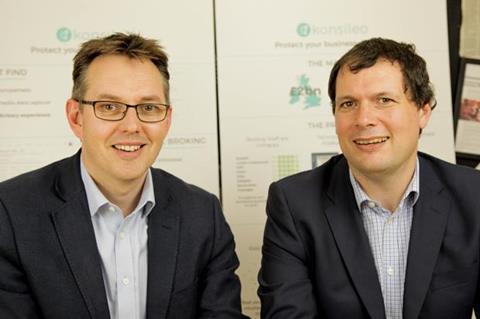 Commercial broking startup Konsileo is in talks with over 100 broking individuals to join the company, which claims to reduce time spent on administration – including compliance – by up to 60%.

The business, which launched last week, is in advanced discussions with a well-known chartered broker to demonstrate proof of concept of its platform, starting next month. Konsileo aims to use data and digital tools to drive operational efficiencies for individual brokers, from better risk data capture to resource management, while eliminating traditional hierarchical reporting structures that stifle productivity and speed.

“Technology disruption of work, and the virtualisation of professional services, is our backdrop. We’ve seen it in real estate and in law,” Chief executive and founder John Warburton, former director of global marketing for Allianz, said.

Konsileo, which took a team of ten developers 18 months to build, is positioned as a solution for mid-market clients who spend more than £3,000 on insurance each year, and who have significant and largely unoptimised quantities of data.  Free of the burden of substantial layers of management and legacy IT systems that dog larger competitors, Konsileo claims its brokers will gain a competitive advantage from having more time to spend with their clients, and through capturing better risk data.

The processes of what you do as a broker are subordinate to processes between broker and insurer.

“We can bring the quality of risk control you see with large corporates into small and medium ones. We can help create the demand for a broker to become a risk advising partner where the conversation is about all the business’ requirement – and not just selling insurance,” Warburton said.

Konsileo has access to all the major UK general insurance market via a partnership with a large chartered broker. It aims to have at least 180 brokers on its platform by the end of the year, including the 10 brokers it will hire to launch and validate the business model in practice. In coming years Warburton said the firm would target hiring 500 individual brokers in the UK and roll out its model to advisory broking markets internationally.

A recent survey from Glassdoor.co.uk showed that broker employees were among the most dissatisfied across all industries, in part because of laborious data-entry tasks that create significant amounts of remedial work.  Warburton said that broking-related improvements from software houses in the industry had largely been confined to working with insurers.

“The processes of what you do as a broker are subordinate to processes between broker and insurer,” he said. “In the past 10-15 years, there has been a lot of innovation, including grabbing and collecting data, but it’s not utilised. If you’re stuck with a form design from the mid 90s, you’re going to have problems.”

Konsileo, which received its FCA licence last month and is a member of Biba, connects brokers with both insurers and clients, including sharing data, which Warburton maintained would be simpler and quicker than using a conventional software house.

“The way that process innovation in insurance broking is constrained by the fact that software houses effectively own the processes, and changes for a single company are very difficult. Having open API’s and faster changing systems can address this,” he said.

Konsileo has four core components. The first is Fact Find, a data capture tool which uses machine learning to translate information gathered at a client meeting into insight, allowing brokers to develop more detailed customer profiles and send insurers requests for quotes without needing to re-key information into a different platform.

The second component is known as Operational Broking, an end-to-end productivity and management tool that includes client prospecting, automatic integration of email and data into the proprietary platform, invoicing, claims and renewals. There is also extensive automated compliance reporting to reduce employee mistakes and fraud.

The third is Risk Hub, a proprietary platform that boosts risk management and pricing via an integrated, chart-based overview. It can be shared with clients to self-serve.

The fourth is Member Experience, a ‘personal P&L’ dashboard and messaging platform that allows users to collaborate, track their performance against a set of predefined KPIs, manage their portfolio including setting commissions — such as ceding some of their cut to team members and experts invited from within the business to help — and respond to input from mentors, who are selected by the individual.

No rival broking firms (nor their employees) will be able to use Konsileo software, with the exception of the trial, which is intended to test product market fit.

Warburton says the mentor model used by Konsileo, and the attempt to create horizontal reporting lines, was a response to established trends in adjacent sectors.

“It’s about the democratisation of the workplace. The rigidities of the careers from the 1990s, the next generation won’t accept,” he said.

Operational Broking will be rolled out in May, Risk Hub and Member Experience in the third quarter of the year.

Chief technology officer and co-founder Peter Henderson said the use of platform could more than half brokers’ administration burden. “Highly skilled brokers with decades of experience are wasting their talents and skills copying and pasting information on clunky systems stuck in the 1990s.

“We have a different contract. We will give you tools to be more transparent… Our system will free brokers from 60% of the time they spend on admin.”

Henderson added that the templated Konsileo approach, as opposed to a bespoke integration, would guarantee that compliance was ‘baked in’ to the product, reducing costs further.

“The challenge is the poor implementation of compliance sitting across multiple processes, rather than the regulator’s requirements per se. It’s not easy to have fluid systems of working,” said Warburton.

“The way that regulatory requirements have been grafted onto insurance broker cultures is ham-fisted, reinforcing control rather than empowering aspects of line management. This can be fixed by better process design focused on meeting the underlying principles of the regulator, rather than by adding compliance reporting processes on top of flawed customer handling.”

“Instead of taking a vertical slice of the chain, we’re optimised from front to end,” Warburton continued, adding that the product would also help address the value destruction of businesses that had been part of consolidation in recent years.

He also said the business was looking at wider applications of its business model, including the Industrial Internet of Things (IIoT) using open APIs to pull together risk monitoring data sets.

Konsileo has adequate funding in place for the next 12 months, but will embark on its next investing round in the next couple of months.

John Warburton has previously blogged on innovation for the Insurance Times. He is speaking at Innovation & Disruption 2017, the industry’s flagship innovation event, next month. For more details, click here.