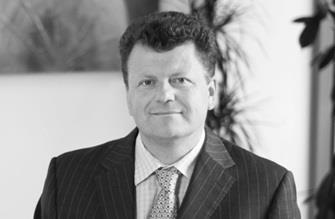 Firstly, it marked the explosion of a one-ton bomb by the Provisional Irish Republican Army outside London’s Baltic Exchange, killing three and causing £800m of damage.

Secondly, that moment is seen as the final straw in an IRA bombing campaign that led to the founding of UK terrorism mutual reinsurer Pool Re, whose model is now envied by governments and insurers around the world.

The man in charge is chief executive Julian Enoizi, who joined in August 2013.

Speaking to GR in Pool Re’s London headquarters, the unflappable and erudite Enoizi holds forth on the changing nature of terror and the massive transformation facing Pool Re – changes so large that the terrorism pool might disappear altogether.

But the backstory of Pool Re is complicated, so let’s start at the beginning.

After the Baltic Exchange bombing, the commercial insurance market and its reinsurers realised the potential massive cost and unpredictability of UK terrorism losses. Lacking data and faced with the prospect of being unable to meet future claims, the market began to exclude terrorism cover from policies.

But the gap in the market was too horrendous to contemplate, and so Pool Re opened in 1993 after negotiations between the insurance industry and the UK government.

Since its creation Pool Re has paid out more than £600m in claims and has reserves of around £4bn.

Pool Re was – and to a certain extent still is – a slightly unusual beast in the insurance world. The firm provides reinsurance for commercial property insurers in the UK, who have a guarantee that they can cover terrorism claims regardless of size. The ultimate backstop is the UK government, who will pay out if claims exceed the pool’s reserves.

The government first wanted the terrorism pool to be a temporary solution. The reason for Pool Re’s unexpected longevity is that the threat of terrorist attacks has been more or less constant since 1993 and is still ranked as severe by British intelligence agency MI5. Since the terrorist attack of September 2001 the UK has had more than 200 terrorist attacks of some form according to global security firm RMS.

The main challenges to Pool Re’s existence have stemmed from the fact that the nature of terrorist attacks shift. To keep up, Pool Re has had to keep changing itself.

Today, the terrorism risk in the UK is very different to that posed by the IRA all those years ago.

Pool Re is modernising and changing – more on this later - but its foundations cater for terrorism risk to property.

But recent years have seen a rise in new terrorist groups and a trend away from damaging property to attacks designed only to kill people and cause mayhem.

This new breed of terrorism, while tragic in human terms, does not trouble the commercial property market the way the IRA strain of terror once did.

So how does this change affect Pool Re and its members?

Enoizi notes the shift in terrorism risk, but says that the industry must not ignore the possibility for property damage to shift back into vogue among terrorist groups.

“Yes it is true that terrorism is now much more focused on softer targets, creating mayhem, causing fear and panic,” he says. “But I think you make a mistake if you say ‘the days of property damage and the marquee effect of the Twin Towers – we don’t need to fear that any more’.

“I often say the oddity of my job is I sit here hoping nothing ever happens. But the reason we exist is to ensure a quick response and protection for British industry in the event that does happen.”

A lot of Pool Re’s current work stems from last year’s tricky negotiations with the UK government, which threatened to cancel its backing.

Though the discussions went on mainly behind closed doors, the rumours were that the Treasury wanted an increase in the yearly premium it got from Pool Re or would withdraw support.

The talks ended with the terrorism pool signing a seven-year deal that saw the UK Treasury increase their share of Pool Re premiums from 10% to 50% from the beginning of 2015.

But in return Pool Re pushed for permission for a raft of changes to modernise the scheme.

The main three changes are changes to pricing to account for perceived risk, creating a simpler product for small businesses and allowing Pool Re to buy external reinsurance.

The last change was the big one for the industry. Eventually, it could lead the industry to get back on board with underwriting and reinsuring terrorism risks without the need for Pool Re or the UK government.

Enoizi says the biggest obstacle to this is that the potentially massive damage from nuclear, chemical, biological and radiological (NCBR) terrorist attacks is still covered by Pool Re.

The problem is that punting NCBR onto the private insurance market leads to the same lack of appetite that led to Pool Re being set up in the first place.

“You could argue that those sort of events are the implied liability of the government in its duty to the people,” Enoizi explains. “But the fact is that Pool Re covers NCBR. Unless the government changes that, you have a factor that you could argue distorts the market by preventing competition.

“So you could then argue that if you cover something as catastrophic as that, why do you exclude something like cyber?

“The industry’s appetite is limited by the fact you have those risks which are so potentially catastrophic that they can’t model, so they can’t price, and therefore they can’t assume as much risk as needs to be assumed to protect UK PLC.”

So does Pool Re’s very existence in this area stifle an underlying insurance appetite to innovate and find ways to underwrite terrorism risks, or is the risk still so catastrophic that this appetite does not exist at all?

“You can argue it both ways,” Enoizi says. “I wouldn’t phrase it the way you did, but you could argue that including NCBR distorts the market. I can’t prove to you that if you remove NCBR, that the market will assume all of the other risk.

“However, I would further argue that Pool Re can lead the market by collaborating with government departments and researching and modeling risk and informing the market, its members, so that they in turn feel more comfortable with the risk and assume more of it through reinsuring the pool.”

Last year Pool Re bought £1.8bn of terrorism reinsurance, led by Munich Re.

Enoizi adds that this was pretty much the maximum available, and that excluding NCBR probably would not see this figure rise enough to cover even the conventional terrorism risks Pool Re covers.

“It’s a very, very difficult question to answer, and we will make a mistake if we rush to answer it and dismantle something that is envied around the world in terms of terrorism pools, hence why I believe the reinsurance programme was the right way to involve the market,” Enoizi says. “However, it may be possible to liberalise some of the Pool Re rules over time and we will examine that of course.”

So beyond the changes announced last year, what does the future hold for Pool Re?

Enoizi says that the next five or ten years will hinge on decisions made during Pool Re’s strategic review, announced last month.

The details of the review are still being hammered out, and the results will not be known until next year, but Enoizi says it will ask deep questions about the future of the company.

“Everything we have done so far, the modernisation, was really to bring Pool Re into where it should be today,” he says.

“But in five or ten years time, that is the strategic question the board has asked me and my team to spend the time and effort on now.

“You could go in one direction and say it needs to be a normalised market and that Pool Re will no longer exist in five years’ time. I can’t tell you now if that’s the answer I’m going to come up with.”

For all of the changes Pool Re has undergone, it sounds like its future changes will be bigger still. Everything is on the table – the company could expand, or it could make itself redundant by passing its role onto the open markets, or it could do anything in between. So once again, for Pool Re and its chief executive, change is the only constant.