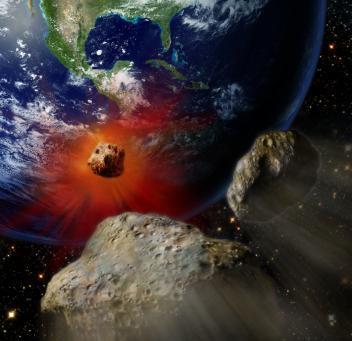 Hundreds of people were injured and buildings were damaged after a meteor exploded over the Russian city of Chelyabinsk on Friday.

According to the Russian Academy of Sciences, the massive meteor weighed 10 tonnes and entered the earth’s atmosphere at a speed as high as 33,000mph.

Most of the damage was caused by the shock waves as the meteor broke up in the atmosphere. The force of the explosion shattered glass dishes, televisions, and windows.

According to local officials, more than 725 people in Chelyabinsk were injured, mostly from glass shards.

Authorities have cancelled school and asked residents to stay indoors.

The explosion is estimated to have shattered more than one million square feet of glass.

Preliminary reports suggest that more than 3,000 homes and business were damaged from broken glass, including a zinc factory, where part of the roof collapsed.

As many as 20,000 people have been sent to find where parts of meteor might have fallen.

The governor of the Chelyabinsk district reported that a search team found an impact crater on the outskirts of a city about 80,000 metres (50 miles) west of Chelyabinsk.

According to catastrophe modeling firm AIR, in many countries with developed insurance markets, a comprehensive multi-peril insurance policy will cover all risks that are not specifically excluded, including meteorite damage.

The dwelling part of the homeowner policy is also generally covered.

The last meteorite strike was recorded in Sudan in 2008.

Hundreds of smaller meteorites strike the earth’s surface every year, although only 10 to 20 are detected. Such meteorites usually reach the surface having been burned down by the atmosphere and are too small to cause damage.

The meteor hit less than a day before an asteroid, known as 2012 DA14, will make a near pass by the earth—possibly approaching as close as 17,150 miles. This massive space rock, which is 46m wide, is one of the largest known asteroids to approach the planet. According to the European Space Agency, there is no connection between the asteroid and the meteor that hit Russia.

According to AIR, the last time an object of a size similar to DA14 hit the earth was also in Russia, and is known as the Tunguska event. In June 1908, the asteroid, which was estimated at 100m in diameter, burst in the air over the Podkamennaya Tunguska River, in Russia’s Krasnoyarsk region. It was the largest such hit in recorded history.