Global insured losses from disasters were $20bn at the half year stage of 2018, according to Swiss Re, two-thirds of the total at the same point last year

Global economic losses from natural catastrophe events reached $34bn in the first half of this year, plus $2bn from man-made disasters, with the re/insurance sector picking up the tab for $20bn (see chart.

Winter storm Friederike was the largest first half loss event, with insured losses of $2.1bn.

Friederike hit Germany and the Netherlands, although France, Belgium and the UK were also impacted.

A series of winter storms in Europe and in the US caused the largest losses in the first half of 2018 (see second chart).

This year’s figures are far less than the ten-year average of $125bn economic losses for the January-June period.

Swiss Re released its preliminary industry-wide disaster loss estimates in the latest of its Sigma report analyses.

Disaster events claimed approximately 3,900 victims in the first six months of 2018, the lowest half-year death toll in over three decades.

Nearly 56% of all global economic losses were insured, Swiss Re reported, as most disastrous events occurred in areas with high insurance penetration.

“We expect to see more extreme weather conditions such as intense heatwaves and dry spells of the like we’ve seen over the last few weeks,” said Martin Bertogg, head of catastrophe perils at Swiss Re.

“This may well become the new normal. According to scientific climate models, temperature, and atmospheric humidity will increase in many parts of the world, and at the same time also become more volatile,” Bertogg said.

“Accelerating urbanisation and the ongoing expansion of dwellings in natural forest areas will considerably exacerbate this loss potential. Society will need to adapt and prepare for these increasing occurrences,” Bertogg added. 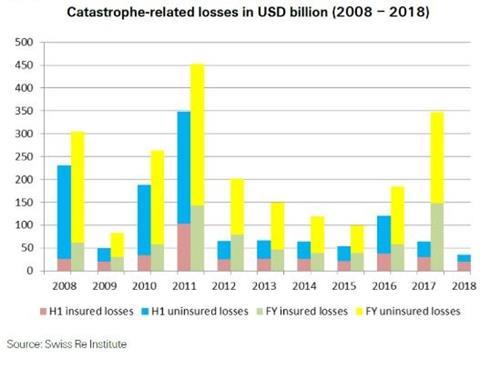