Swiss Re has isolated five top risks the re/insurer thinks have the highest potential impact.

Its 2018 Sonar report features 18 emerging risk themes and seven trends for the re/insurance sector and for the industries and sectors it insures.

Swiss Re’s yearly Sonar report “aims to spark an informed dialogue about what future risk landscape might lie ahead”, according to the Zurich-based risk transfer firm.

Emerging geopolitical risks top the list, with an eye to the rise of China and challenges to the rules-based international system, presently underpinned by a US-led unipolar world.

“A new multi-polar world is evolving in the geopolitical landscape as power drifts to Asia, democratic influences decline and the relevance of global governance institutions erodes,” said Swiss Re.

“Possible turmoil in financial markets and possible erosion of legal rules could threaten the ability to run global businesses,” the re/insurer added.

The erosion of risk diversification was second of the five major risks facing society on Swiss Re’s list.

Broad diversification and the free flow of capital are key to run a global re/insurance business, Swiss Re noted.

National protectionism and regulatory fragmentation are jeopardising the benefits of international diversification central to the reinsurer’s business model.

The cost of asbestos has reached $100 billion in losses and counting, according to Swiss Re.

Not all countries have banned asbestos, noted the re/insurance firm.

“The UN estimates that one third of the people living in Europe are potentially exposed to asbestos at work or in the environment,” it said.

Lurking cyber risks are coming back to bite companies, Swiss Re warned.

Flaws and vulnerabilities in hardware and software may remain undetected for a long time, the company cautioned.

“These dormant threats can have a very long tail risk,” Swiss Re said.

“Algorithms are only human too – opaque, biased and misled,” quipped the reinsurer.

An increasing number of business processes are driven by algorithms, Swiss Re noted, emphasising that human-created artificial intelligence (AI) is unlikelty to be infallible.

“Often, algorithms are portrayed as being objective, without human bias,” the report said.

“But algorithmic applications are not infallible, they base their actions on human judgement as well,” Swiss Re added.

Discriminatory bias within AI may also translate into defective modelling and prediction, Swiss Re warned, bringing a two-fold risk to insurance and other industries.

“Our Sonar report is not about forecasting the future or covering all emerging risks, but rather about preparing for its potentialities”, said Raaflaub.

Swiss Re noted that emerging risks are newly developing or evolving risks that are difficult to quantify, but also stressed their significant impact on industry.

“The more transparency and the more time we have, the better we can adapt to the changing risk landscape”, Raaflaub added.

See slide below, taken from the Sonar report, showing emerging risk themes, grouped by immediacy and severity of impact. 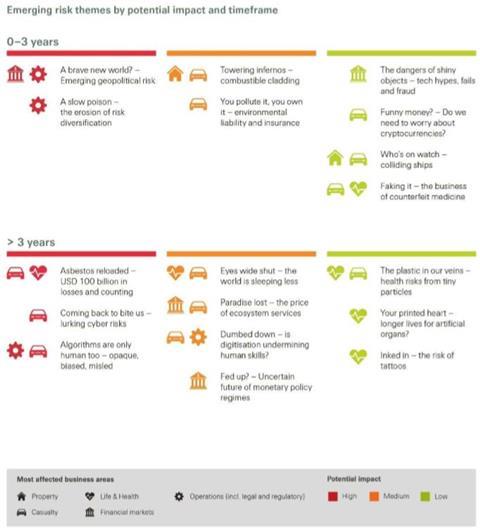