Confidence in a gradual, if uneven, rise in global interest rates may be starting to take hold, according to a report from Moody’s Investors Service

After years of “low for long” concerns about the outlook for central bank interest rates in the biggest insurance markets globally, confidence of a gradual uptick in global interest rates is rising.

Solid – but slowing – economic growth in advanced markets for 2018 and 2019, together with tightening monetary policy, support a trend toward gradually rising global interest rates over the next several years in key markets, across the US, UK and the European Union, the rating agency said.

Such a gradual rise in interest rates would also have potential knock-on effects in certain emerging markets, Moody’s added.

“A gradual rise in interest rates is credit positive for the profitability of all insurers,” said Moody’s.

“Increasing asset yields boost life and property-casualty (P&C) carriers’ investment income and widen spread-based product earnings. However, the timing and trajectories of the rate rises will be country-specific, based on economic and insurance market factors,” continued the rating agency.

However, any sudden rise in interest rates would be negative for insurers, Moody’s warned.

“Markets with protective product features, such as the US and Japan, or with few product guarantees such as the UK, have moderate risk in the event of a spike, while markets like France and Italy, which have limits on surrender penalties or short surrender charge periods, would be most exposed,” continued the ratings firm.

French and Italian insurers are Europe’s most exposed to such “surrender risk”, Moody’s said.

Within Europe, the French and Italian life insurance markets would be most at risk of elevated policy surrenders if interest rates rise suddenly.

“This is because surrender penalties are limited by law in France, and products have a relatively short surrender charge period (three years) in Italy,” said Moody’s.

“In these countries, insurance products also lack differentiation from banking and asset management products and are therefore easily substitutable,” the rating agency said.

“This risk has been identified by the French government, which recently introduced a new legislation to block surrenders in an emergency, albeit only temporarily,” Moody’s added.

In the US, earlier monetary tightening gives insurers a jump on rising investment yields, Moody’s suggested. US interest rates have risen sooner and further than in other global economies, with the negative gap between new investment yields and US life insurers’ average portfolio yields narrowing substantially, with certain investment categories forecast to turn positive in early 2019.

“This means investment yields and income will rise, and pressures will continue to lift on legacy blocks of interest-sensitive life insurance, fixed and variable annuity (VA) products, and long-term care (LTC),” Moody’s said.

In many other markets, Moody’s forecasted rates will remain low for longer, but will be manageable for most.

“Where monetary tightening is proceeding more slowly (for example, in Europe) or may not begin for some time (Japan), interest rates and investment returns will remain below historical levels, depressing investment profits,” the rating agency said.

“However, in many markets, the earnings impact is mitigated by insurers’ defensive strategies to deal with still-low interest rates, including their shift to interest-insensitive fee-based products and businesses, and a focus on high-morbidity/mortality-margin products,” Moody’s added. 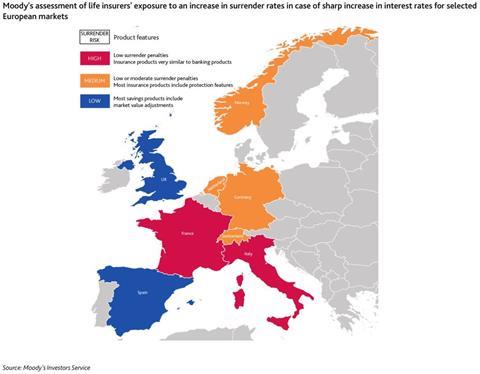