Heightened geopolitical tensions, protectionist sentiments and trade disputes have made the world more dangerous for cross-border business, according to Marsh 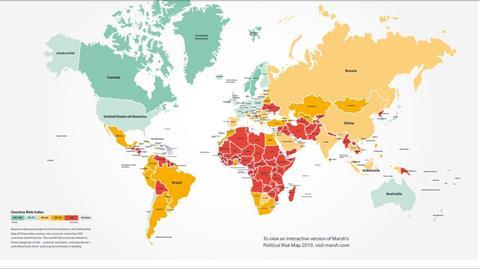 The insurance broker blamed continuing US-China tensions, trade wars, Brexit and changes within the Eurozone, the future of Iran’s and North Korea’s nuclear programs, and tensions between Russia and the West.

“In uncertain times, vigilance and broad, systemic risk analysis coupled with political and trade credit insurance, will be vital to minimizing these threats.”

The map rates more than 200 countries and territories on the basis of short- and long-term political, economic, and operational stability and gives insight into where risks are most likely to emerge.

The map suggested it could be a bad year for the development of a more globalised world with more countries expected to adopt more isolationist and protectionist sentiments and practices.

Meanwhile it showed there was likely to be an increase in the use of trade tariffs as geopolitical disputes between the US and China show signs of escalating. Marsh said that export economies like Germany, which is stuck in the middle, could suffer as a result.

The broker predicted that Russia’s relationship with the West will remain tense, which could see the nuclear superpower hit with more sanctions.

Naturally, Brexit was also high up the list of concerns with the UK’s negotiations to exit the European Union continuing to loom over the political risk landscape. Meanwhile continued political instability in Spain led to a sharp decline in the country’s short-term political risk index, Marsh said.

But there were some bright spots. The African region saw some of the biggest improvements in political risk, although it was also home to some of the countries with the most notable deteriorations.

However, uncertainty around elections and deteriorating economic and humanitarian conditions have led to sharp increases in political risk in Zambia, Mali, Algeria, Tunisia, Cameroon and the Central African Republic.