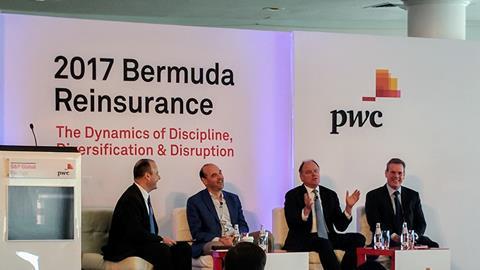 Days of under-pricing are numbered after HIM - PwC leaders' panel

Years of under-pricing could be over after the 2017 Atlantic hurricane season, says McGavick

Harvey, Irma and Maria were in stark view during the CEO’s view from the top at this year’s PwC Bermuda Reinsurance conference.

Speaking at the ‘View from the Top: Reinsurance CEO Perspectives’ panel this November, XL Group chief executive Michael McGavick stated that he believed the era of under-pricing was over, with Harvey, Irma and Maria (HIM) drawing a clear line in the sand.

He said: “When you have a product that has been chronically under-priced over multiple years, events like this are going to cause an awakening among the underwriting community that will change things fairly drammatically.”

He added: “The question is how far will it spread from direct connection, and while clearly I think the effect lessons the further from the core event, I don’t think that means it’s nothing.”

McGavick highlighted that the days of cedents wielding leverage at the renewal table could be numbered: “Underwriters are awake to the fact that they were selling their product for less than its real cost and once they’re awake to that fact they don’t go back.”

O’Donnell stressed that while the losses may have been geographically localised, he hoped that “at a point when the markets are changing, that the pain of that change is shared”.

“Underwriters are awake to the fact that they were selling their product for less than its real cost and once they’re awake to that fact they don’t go back.” - Michael McGavick, XL Group

While many thought this would be a telling time for ILS and third party capital, it was clear from the discussion that the challenge was being felt most by the traditional markets.

In fact, O’Donnell commented that Q3 2017 has proved that third party capital is in fact in it for the long-haul.

He said: “The question we internally are looking forward to seeing the answer to over 2018 is whether third party capital is patient or cheap. If it’s cheap it should say 2018 will be no worse than 2017 therefore I should come into 2018. If it’s patient it says, ’I’ve stuck with you because rates have come down, but you’ve promised me a better market post event’, and the response we’re getting from capital – it is more patient than cheap.”

McGavick pointed out that one of the biggest challenges for the traditional markets were the inexperience of the workforce in handling this kind of environment, saying: “This will play out over time and will role across the sectors, because of the inexperience of our workforces relative to this kind of market. there is a great number of brokers and underwriters who have never had to tell a client the price was higher. That’s a really difficult and different task than just fighting over how far down it will go.”

He added: “We actually started training programmes with our underwriters about a year and a half ago realising that the course we were on was unsustainable, and knowing something would happen. We were event all the way through before this happened and here we are. i have to keep working to create buddy systems with our most experience underwriters who have been through cycles and those who having so that they understand what comes next.”

Adding to this, Grandisson commented that while no one wanted to make the first move, realistic pricing was the best thing for clients: “No broker wants to be the first one to say hey there’s going to be a 15% rate increase – but brokers have to be careful, as they really want to get the best deal for their clients so that’s what they’re going to have to do.”

The event, held in association with S&P Global Ratings, took place on 7 November at the Hamilton Princess Hotel, Bermuda.