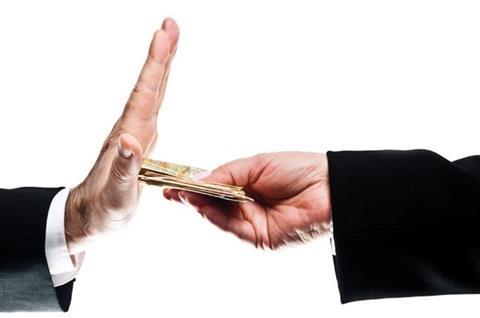 The insurance sector can’t say it hasn’t been warned. In recent years, Aon, Willis and JLT Speciality Finance have all been fined by regulators that found the firms did not have adequate safeguards against bribery and corruption.

Those penalties, which amounted to millions of dollars – and inflicted untold reputational damage – were followed in March by a £315,000 ($527,000) fine for insurance broker Besso, which the Financial Conduct Authority accused of operating a “weak control environment”.

Bribery and corruption have risen up the regulatory agenda since legislation such as the UK’s Bribery Act and the Foreign Corrupt Practices Act in the US came into being.

The difficulty for insurers is that many of the overseas markets in which they see the most exciting opportunities for growth are territories where they are more likely to be vulnerable to problems with corruption.

In particular, the Middle East and North Africa region, where insurers are increasingly keen to operate, scores badly in the index of corruption perceptions compiled each year by Transparency International.

The index, widely used as a yardstick for judging which countries firms should be most concerned about doing business in, ranks countries such as Libya, Syria, Iraq, Yemen, Nigeria, Iran and Egypt especially poorly. More developed Middle Eastern countries such as Saudi Arabia and Kuwait are also some way down the rankings.

There are problems elsewhere too. Russia, ranked 127 out of 177 countries in the index, is a market targeted by many insurers, while low- scoring countries in Latin America and the Far East are also countries in which the sector sees valuable prospects.

So what do insurers, reinsurers and brokers transacting in these countries need to look out for?

The biggest issue is with third-party introducers, without whom it may be difficult to enter a new market or even continue winning business.

In some of those markets, these introducers do have expectations – such as being paid much larger fees than normal, on the tacit understanding that both intermediary and client are receiving some sort of kickback, or accepting invoices demanding payments for services not actually provided or normally charged for.

“We see a lot of firms complaining that as everyone else is doing it, they miss out by playing by the rules,” says Michael Ruck, a senior associate at law firm Pinsent Masons.

Satellite offices can also be vulnerable to corruption concerns, particularly where head office has poor visibility of staff on the ground, who may have come to their own arrangements with local firms.

However, Ruck says the balance has shifted for large international insurers. The chances of getting caught are greater, as is the damage that a breach causes.

The cost of walking away from business that can’t be secured through legal means may often be smaller than the potential cost of turning a blind eye to corrupt practices in order to do the deal. Ruck, who spent six years working for the FCA, warns the regulator is setting insurers “a very high bar” on corruption. “You will get caught,” he says.

Peter Cook, a member of the secretariat at the International Association of Insurance Supervisors, says insurers must temper their desire to grow with prudent risk management.

“Firms should always take sufficient account of potential risks, including vulnerability to bribery and corruption, when moving into new products or markets,” he says. “There isn’t always enough attention paid to good governance or risk management and we see these problems occurring again and again.”

Corruption in MENA: local insurance brokers give the antidote

How to be a good reinsurer and really show it

The fines handed down by the FCA highlight key issues the insurance sector must confront, says Kari McCormick, partner and head of financial services and insurance at law firm Burges Salmon – or risk sanction themselves. “We are recommending all brokers carefully review the effectiveness of their anti-bribery systems and controls,” McCormick says.

There doesn’t have to be any evidence of corruption or bribery for regulators to intervene; a lack of effective systems and controls is in itself a breach of the regulation.

Nor is it enough for firms simply to have written policies on corruption. The regulator will want to see that these policies have been tailored to the particular risks faced by the business and that their rigour is regularly checked – though ‘mystery shopper’ exercises, for example.

Insurers will also need to conduct thorough due diligence on all third parties, so they understand who they’re dealing with, what services they are paying for and whether the payments being made reflect the work being undertaken.

This work needs to be done before the relationship with the third party begins, and on an ongoing basis.

Nevertheless, David Thomson, director of policy and public affairs at the Chartered Insurance Institute, says the insurance sector needs to show commonsense rather than getting bogged down in red tape.

“There is a danger people try to create a compliance culture and over-regulate, which can paralyse an organisation,” he warns. “Usually, the best test is simply: does this feel right?”

In practice, Thomson says, it is possible to address particular vulnerabilities through traditional safeguards. “On third parties, for example, you need supplier contracts that set out clearly what standards are expected as part of the commercial relationship,” he says.