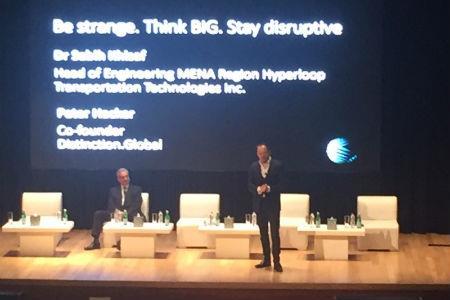 The speed of technological change is moving faster than many insurers feel able to cope with but they need to take measured steps now to deal with the fundamental shifts taking place across the risk landscape.

That was the key message from a special StrategicRISK run session at the Dubai World Insurance Congress which focused on risks around the development of pioneering cutting edge technology such as the Hyperloop rapid transport projects.

Peter Hacker, innovation specialist and co-founder of Distinction.Global, told delegates that it was crucial for insurers to act now but they should not rush to make hasty decisions.

Greater understanding around different technologies and the specific exposures created was crucial in achieving this, Hacker said.

While technology advances should be welcomed, Hacker conceded that dealing with them would be no easy task.

“Think outside the box,” he said. “Don’t think we can do everything internally which was a trend we saw in the past.

“We don’t need products out there – we need solutions.

Most importantly, he said, closer collaboration with governments, academics and other relevant agencies was required.

“There are going to be big challenges around regulatory and potentially security aspects,” he said.

“All the parties involved need to work more closely together – underwriters, clients, governments.”

Earlier, delegates heard a presentation from Dr Sabih Khisaf, head of engineering for the MENA Region at Hyperloop Transportation Technologies.

As project lead Dr Khisaf is responsible for all aspects related to the design and implementation of the pioneering transportation system - which in theory is able to transport passengers in a vacuum tube at more than 1300kph.

But, as he explained, while the planned implementation of Hyperloop as a mainstream transport system was new – the technology behind it was not, with similar concepts dating back more than 150 years.

As such, he said, it should not be so daunting from an insurance perspective.

In addition, the fact that it was in a vacuum meant no oxygen, therefore there was not the type of fire risk inherent in some more traditional rapid-transit systems.

“Integrating the Hyperloop with current and future modes of transportation to ensure a full-package transportation solution,” was a key objective Dr Khisaf said.

And he urged delegates to consider the potential opportunities that projects such as Hyperloop can create – rather than dwell on negatives.

Citing a Chinese proverb he said: “Those who say it can’t be done, should not interrupt those doing it.”