2023 could mark return to cash-flow underwriting

US commercial insurance pricing rose by an average of 5.7% in 2022, but there rates are beginning to moderate

The composite rate for all property insurance continues to be challenging with a rate increase of 9.3% in the fourth quarter. Certain cat-exposed commercial properties are being assessed increases as high as 25% to 30%.

Cyber insurance rates continue to increase the most aggressively at plus 20% in the fourth quarter. However, there is a trend towards slight moderation.

“Virtually everyone was assessed more restrictive terms and conditions. The trickle down will have a notable effect on the profits of property MGAs and program managers due to lower base commissions.” 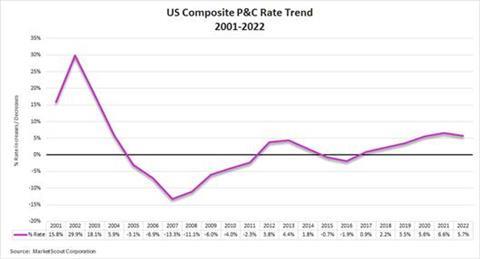 Kerr forecasted the 2023 insurance environment by noting, “If there is a slowdown in the economy and/or the Fed continues to increase interest rates, we may well see moderation in insurance rates.

”In the early 1980s, insurers did account for an interest income float on premiums received, better known as Cash Flow underwriting. This concept was mostly applied to longer tail casualty lines which have slower and longer claims pay outs.

”As insurers accounted for the increased income from interest rate payments on premiums paid, rates were adjusted downward. Arguably, an insurer could write at a 100% combined loss ratio because the interest they received on booked premiums was 12% to 20%.

”We are a long way from seeing interest rates at those levels, but even at 5% it will have a positive impact on the ROI of some insurers, possibly resulting in a moderation of rate increases.”