The current CFO says no ’radical changes’ are on the agenda for 2022, but digitisation will impact how the insurer executes its overarching strategy next year

Although promising “there won’t be any radical changes” to the business come the new year, Hussain does plan to build on the “long-standing, well established relationships” the insurer has with its existing broker partners – including making transactional interactions “more digitised”.

Speaking exclusively to Insurance Times following the publication of Hiscox’s quarter three trading update on 2 November 2021, Hussain explained: “We’re hopefully going to build on the [broker] relationships that we have.

“These tend to be long-standing, well established relationships that go deep within our organisation and deep within the broker’s organisation. Over time, we’ve been responding to both our end customers’ needs and indeed our brokers’ expectations of insurers.

“What you can expect to see is a continuation of that increase in digitisation in how we interact with [brokers], so we of course have the personal relationship, but how we interact from a transaction perspective, that is increasingly going to become more digitised - particularly at the higher volume, less complex end.

“That’s a trend you would expect to see across the whole of our retail business and indeed across [the] London market. That will be a major trend that will continue.” 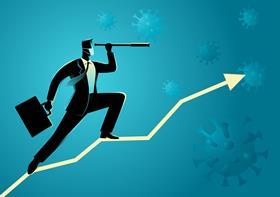 Masojada, who announced his plans to leave Hiscox back in July 2021, has spent the past few months completing a transition period with Hussain before formally exiting the business at the end of the year.

Telling Insurance Times about how tasks have been divided up, Masojada joked: “The way we’ve divided it up between Aki and myself is Aki has all the fun things about broker relationships, business planning, strategy and so on and I’m just making sure that all the regulatory and compliance things are sorted.”

‘Great runway’ of opportunity ahead

As Masojada pens his last Hiscox board report, Hussain admitted that he is “still fine tuning” his leadership priorities for the business next year. Although his key agenda items “are being developed” still, Hussain does know that “there won’t be any radical changes”.

In part, this is because Hussain is an internal successor, with five years of Hiscox experience under his belt. This means that Hussain has already “had a significant influence on the strategy and the direction that we’ve taken”, he said.

Hussain continued: “This next bit is about refining [the business’ strategy] a little bit. Given the change in the external environment [and] digitisation, that will mean that how we execute [our] strategy in this next phase will be different, but the overarching strategy and direction of the business will not change.”

The CFO added that he is “delighted to be taking over”, especially as “Bronek has been able to hand over at a point in time where we have an abundance of opportunity still ahead of us and a great runway ahead of us”.

He said: “I’m really looking forward to taking that on.”

Masojada, meanwhile, confessed to being “content with the decision to leave” Hiscox because he is “ready to go and do other things”. This includes continuing his role as chairman of Placing Platform Limited (PPL), the London market’s electronic placing platform.

PPL enables brokers and insurers to quote, negotiate, bind and endorse business digitally across lines of business such as terrorism, marine, casualty and property.

In addition, he became the chairman of the East End Community Foundation (EECF) in November 2021. The EECF is a grant-maker and philanthropy organisation dedicated to improving lives in London’s East End.

“The reality is when you have an internal successor, people’s focus immediately goes to Aki and not me. I’m already beginning to focus on other things beyond Hiscox,” Masojada said.

More work to be done on cyber cover

One line of business that Hiscox continues to focus on is cyber insurance.

Despite the insurance industry’s “understanding of [cyber risks] improving”, Hussain added that “in the world of insurance, I’d still say it’s relatively new. It’s a risk that has evolved very, very quickly from what it was 10 or 15 years ago. And it’s still evolving pretty quickly”.

He continued: “We’re working both within Hiscox and across the industry on improving the design of the product – there’s still more work to be done there.

“The risk is evolving - the nature of the product needs to evolve as well. But what we’re very clear on is [there is] a need from our customer base and we have to find a way to deliver to that need in a way that’s economic for them and for us.

“There has been significant strides made in the last few months - pricing has improved - but there is more work here to be done.”

This includes contributing to the “significant improvement in how insureds are thinking about cyber risk”. Hussain said that the Hiscox CyberClear Academy, a National Cyber Security Centre-approved cyber training programme which the insurer launched in April 2018, has really made a difference here.

He explained: “[The academy] is designed to help mitigate and prevent these sorts of scenarios occurring for the very small businesses, typically for businesses that don’t have their own IT departments.

“If you look at the statistics, the single biggest driver of ransomware, hacking and so on is still the inadvertent click by an employee on a link and therefore just creating enough awareness and tools in these small businesses to avoid that is hugely [beneficial].”