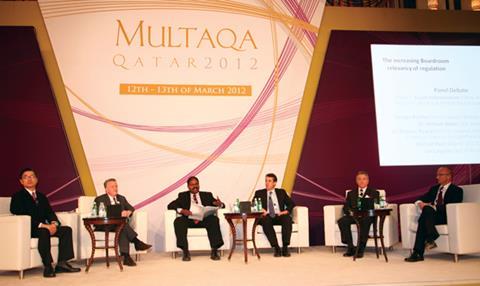 On 11 and 12 March 2013, the Qatar Financial Centre (QFC) Authority and Global Reinsurance will be hosting the seventh Multaqa Qatar conference at the Ritz Carlton in Doha. A line-up of experts from commerce and the (re)insurance industry will discuss and debate the Middle East insurance market and its future. Most critically, speakers will ponder whether the region is realising its potential.

Over the course of the past decade, the Middle East - in particular, the countries of the Gulf Cooperation Council (GCC) - has been heralded as ‘the next big thing’. The combination of rapid economic growth, sovereign wealth, large energy and construction projects, and low insurance penetration has captivated (re)insurers seeking new markets and opportunities. But how is the market developing six years on from the first Multaqa conference, and are those ingredients that promised so much finally coming together?

For Arig chief executive Yassir Albaharna, insurance penetration in the region is still too shallow. He points out that between 2001 and 2010, non-life insurance volumes as a percentage of gross domestic product increased marginally, from 0.7% to 1%, against a world average for emerging markets of 1.3%. On a per capita basis, every person in the Middle East was spending just $79 on insurance in 2010.

“Despite the impressive economic growth and the value accumulated in the GCC, and despite the sharply increased number of brokers and insurance and reinsurance companies, penetration has stubbornly remained at very low levels,” Albaharna says.

“There is only a limited range of compulsory insurance classes that would support premium development. But when governments decide to make protection mandatory, professional standards can take a backseat. It is an open secret that while medical [insurance] has been adding a lot of premium volume to the regional markets, few companies have managed to turn it into a profitable business. The same may well be said about the takaful sector.”

Clearly the introduction of mandatory covers, such as health and motor, has increased the amount of original premium coming into the market. But with such intense competition for this premium, and a lack of underwriting discipline, prices remain soft. For a long time the primary market has been characterised by a large number of small insurance companies that retain little risk, ceding the majority onto reinsurers in return for commission.

Once a niche topic, takaful insurance and the issues it faces is likely to remain a key topic on the agenda at next year’s Multaqa. While there is growing capacity for Sharia-compliant insurance products, the sector remains limited by the extent of retakaful cover available.

The underlying takaful industry is also subject to intense competition and remains immature, according to Al Kareh. He says the sector has yet to reach its potential and produce a retakaful model that is “convincing and credible”.

“A key disadvantage (which is common to the conventional reinsurance capacity in the region as well) is the fact that reinsurance generally requires large balance sheets, global portfolios and superior technical skills to make the economics work,” he says.

Risk traders or risk takers?
A common complaint in the Middle East is that cedants behave more like risk traders than risk takers. While this risk transfer model continues to dominate, there will continue to be a reliance on proportional treaty reinsurance.

Albaharna says: “What we can see is clients becoming more selective with their treaty cessions in order to protect the rather extraordinary levels of treaty commissions that present a significant part of their income stream.”

While some of the larger insurers are allocating more resources and increasing their net retentions, market-wide the risk trading role persists. Net retentions gravitate around 57%, compared to the 83% seen in OECD (Organisation for Economic Co-operation and Development) countries. But diminishing investment returns and tighter regulation requiring better capitalisation is starting to put this risk transfer model under pressure.

Ultimately it is the high commissions paid by reinsurers that help to maintain poor business practices. “Retentions will only move up once reinsurance commissions moderate and insurers feel an incentive to turn risk retention into a profit maker,” Albaharna says.

With underlying prices so low, rates on the reinsurance side have yet to provide much of a return. And yet reinsurers continue to set up offices in the region, opting for one of the area’s rapidly growing insurance centres. In the aftermath of the Arab Spring, the QFC and Dubai International Financial Centre have emerged as the dominant forces on the international (re)insurance scene, while Bahrain remains a popular centre for insurance, particularly for takaful business.

The huge investment in infrastructure in GCC countries continues to gain momentum, with roads, bridges, high-speed railways, airports, huge property developments, and energy and water projects demanding (re)insurance capacity and expertise. With increasing capacity available, many of these projects are underwritten locally.

Guy Carpenter managing director Christopher Pleasant says: “What I always find interesting is that for a lot of the global reinsurers, when they see Middle East business out of European or US headquarters they feel the business is too competitive. And yet when they do an analysis of the market they decide there is a margin there to open in the region and trade business there profitably.

“Even if it is competitive at the moment I think everyone sees there are substantial growth opportunities there over the next five to 10 years and everybody wants to be in the region to take advantage of that growth,” he adds.

“The two countries that always seem to come up are Saudi Arabia, because it has such a large population and there is growing acceptance of insurance as a product and compulsory classes introduced there, and Qatar,” Pleasant says. “This is because they have a large amount of disposable wealth, some of which is funding investment opportunities in Qatar. Things like the World Cup coming up means there will be projects in construction which has been quiet for the past year to two years in large parts of the Middle East.”

Rate outlook
There was some modest firming of reinsurance rates in 2012, reflecting the loss experience in the region and beyond. The Arab Spring, floods in Saudi Arabia and a series of property and fire losses exerted upward pressure and prompted a re-evaluation of the scope of cover. Further afield, the $100bn-plus catastrophe losses in 2011 took capital out of the industry, while the losses from Superstorm Sandy in October 2012 continue to mount.

But with existing players and new entrants continuing to fight for a slice of the action, rate improvement is likely to be short-term in nature. Pleasant says: “The market accepts that the original pricing on insurance business is below where it should be, but that’s a reflection of the competitive nature of the original market.

“With regard to the reinsurance market, we’re seeing a bifurcation between the larger companies who are taking more control of their own reinsurance and pricing because they have the income base to do that, and the rest of the market, which is still generally dependent on reinsurance on a proportional basis.

“It looks like the renewal season will be flat,” he says. “All the changes that were deemed necessary have been introduced over the past 18 months, both by Thailand and the Arab Spring, and I don’t see any tightening there. The reinsurance pricing will really be down to the performance of individual companies. There will be some pressure from profitable insurance companies to squeeze some more profit out of the market, but generally the market will be flat.”