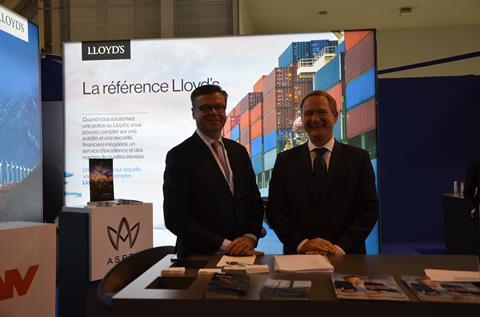 Moving to provide surety to clients amid the uncertainties of Brexit, Lloyd’s is working to get its new Brussels subsidiary operationally ready this summer.

The London-based insurance market is in the process of gaining approval from Belgium’s regulator to begin underwriting Continental European business from ‘Lloyd’s Insurance Company SA’ in time for 1 January 2019 renewals.

At this year’s AMRAE event sister-title StrategicRISK caught up with Vincent Vandendael, chief commercial officer of Lloyd’s (on the right in picture opposite), and Guy-Antoine de la Rochefoucauld, director general of Lloyd’s France (left in the photograph).

“Essentially we had to try to remove the uncertainty that Brexit created. The main intention has been to secure and bring certainty to customers and to all our market stakeholders,” said Vandendael.

Lloyd’s chose Brussels as the location for its new insurance company, designed to provide single market passporting continuity. “Brussels being the heart of the European Union is obviously helpful. Lloyd’s is committed to Europe and all our stakeholders and customers within the single market,” said Vandendael.

He expressed confidence that the National Bank of Belgium (NBB) would approve the new company on time. “We’re well within the timelines. Of course, it’s also the NBB’s timeline, so we need to be patient, but we enjoy a very good collaboration with the Belgian regulator,” said Vandendael.

The new subsidiary is a significant undertaking, with €130m in capital. “It is a fully-fledged insurance company, entirely capitalised and compliant with Solvency II, using standard formula, meeting all governance requirements, with a staff in Brussels, and its own C-suite and board. We want to start writing business on 1/1 2019, but operationally we want to be ready by the middle of 2018 for a six-months testing period,” he said.

Despite the costs, it provides the best option for French customers and stakeholders, de la Rochefoucauld suggests. He notes that in 2016 Lloyd’s underwrote €0.5bn premium in France. “We’re confident the new structure offers an even better opportunity for Lloyd’s to grow in the French market,” he said.

“The beauty of this Brexit model is that the distribution of products is fundamentally unchanged. The underwriter can sit in London, Brussels or France. The difference will be that today the underwriter would use syndicate stamp, and in future it will be a Lloyd’s Brussels stamp,” de la Rochefoucauld added.

Lloyd’s is “looking at costs carefully to minimise their impact”, Vandendael stresses. “Brexit is a big challenge, but we have to turn that challenge into optimising how businesses deal with Lloyd’s. There is no doubt that in comparison with the current situation we will incur additional costs and have capital outside where it currently is,” he said.

“However, we know that our model is the most efficient compared to the other options that our members have. The alternative is that you would have to set up an insurer that is fully Solvency II compliant, capitalise it on your own, and replicate the Lloyd’s branch structure of 17 branches Lloyd’s across the single market,” Vandendael added.