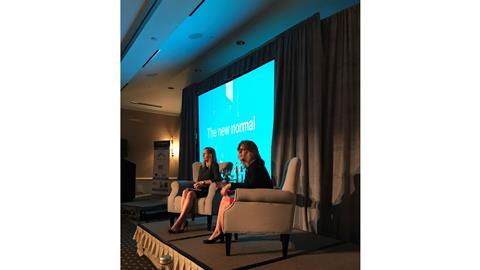 The future's brighter with young millennials, say Reardon and Faries

During their fireside keynote, the Hamilton Re chief executive, and Tokio Millennium Re head of Bermuda talking challenges and opportunities, and the future of the industry

Boards should have young Millennials mentoring their members to help change the culture within the industry, the audience at the GR Innovation & Insuretech conference was told this morning.

Kathleen Reardon, the CEO of Hamilton Re, and Kathleen Faries, the Head of Bermuda for Tokio Millennium Re, were talking on ‘A New Kind of Company for a New Kind of World’ and concentrated on several key themes.

One was the culture within an organisation and Faries said there had to be changes otherwise “someone will come in and disrupt us from the outside”. “We have all these boards and they need to have young Millennial mentors,” she suggested.

Hamilton Re has an open plan design “that is conducive to ideas” and Reardon said the culture at the firm was to have a non-hierarchical structure where everyone’s voice could be heard in order to keep the need for innovation at the forefront of people’s minds.

Reardon and Faries talked on keeping the industry relevant, technology and the need to recruit more talent - about 300,000 people within the industry are soon to retire.

“The world is changing quickly, and we have to have leaders and talent “that understands what we will look like in five, ten, 15 years from now and who will lead us through this transformation”, said Faries.

And Reardon told the audience: “The talent coming in today has got to be the disruptors and this is a huge opportunity for people coming into the industry.”

She also suggested reaching out to potential recruits at high schools rather than at university. “That is where we need to entice people in as we see this looming talent crisis.”