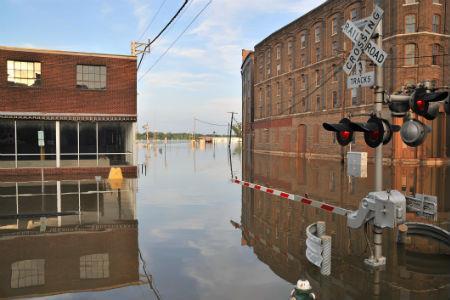 Flood was one of the main loss drivers last year. According to Aon Benfield’s 2016 Annual Global Climate and Catastrophe Report,

In total, there were 315 natural catastrophe events during the year, generating economic losses of $210bn – the first time the $200bn loss threshold has been exceeded since 2013.

One of the areas that was affected heavily was the US. In August 2016, it saw economic loss of between $10bn and 15bn, of which only $3bn was insured loss.

Much of this loss would have been covered by the National Flood Insurance Program (NFIP).

According to the Federal Emergency Management Association (FEMA): “The NFIP is a federal program enabling property owners in participating communities to purchase flood insurance as protection against flood losses, while requiring state and local governments to enforce floodplain management ordinances that aim to reduce future flood damage.”

FEMA adds that more than 22,100 communities in the US are participating in the NFIP and more than 5.1 million NFIP policies are in force, providing $1.25trn of content and building coverage.

There are problems, however. The NFIP is $24.6bn in debt. In addition, the recent budget proposal from President Trump cuts funding for the creation of flood maps by close to $200m.

The NFIP agreement is up for renewal in September, when it will go in front of Congress, and JBA Risk Management US managing director Matt Reid believes this could lead to opportunity for the (re)insurers.

“The reauthorisation in September of the NFIP is a critical moment. Add this to the budget proposal, and we have another element that is forcing people to look at the market with fresh eyes. With the proposed cut in funding in the development in flood maps, NFIP is going to be even further behind the curve in really understanding the underlying risks.

“Now we’re seeing more and more insurers saying they want to understand flood risk better. I wouldn’t like to predict when the private market is going to take off, but it has started.” This opportunity has not been missed by JBA Risk Management, a leading provider of flood risk information in the UK and Canada, which this year expanded its US offering with a new office in California. As Reid outlines, this scenario leaves the market wide open. The question is: what hurdles are in the way of better private sector participation, and how can these hurdles be overcome?

There is a clear opportunity in flood risk in the US for the private sector. NFIP, however, is heavily subsidised with taxes, which not only creates a burden on the tax paper, but also skews activity from private firms.

More and more insurers are saying they want to understand flood risk better. The private market is going to take off

According to Reid, more private participation is required – both with the NFIP and outside it – to provide the best deal for policy holders.

“There is pressure for the rates to more actively reflect the underlying risks. This way, it becomes easier for private insurers to compete with the NFIP on cover that is competitive. But I think we’re also seeing that the NFIP recognises that more private participation in the programme itself is required,” he says.

Another hurdle for the private sector has been the lack of widespread access to detailed information that considers all types of flooding. Outdated FEMA maps have proved unappealing, according to Reid.

“The NFIP has so tightly regulated the market using the FEMA maps, it has simply stifled the appetite from the private sector,” he says.

He stresses: “It’s important to understand that the FEMA maps that the NFIP use do not account for fluvial flooding; a lot of them are out of date and the amount of urban development that has happened since the maps were created significantly changes the nature of the risk.”

Fluvial, or riverine flooding, occurs when excessive rainfall causes rivers to burst their banks. According to FEMA, fluvial flooding is the most common form of flood in the US.

While the FEMA maps may be outdated, Reid does acknowledge that flood, unlike other events in the US, is hard to model owing to the various elements that need to be considered.

“Flood, unlike earthquake or hurricane, requires detailed modelling at a reasonably high geospatial resolution. A flood event can affect two properties close together, but not a third that is equidistant, owing to the differing terrain. That complexity makes it hard to model flood in an accurate manner.”

The improvement of models has in the past focused on the upping of resolution, but flood requires other factors to be considered in the model. This is a factor that is being addressed by a new Aon Benfield solution.

With the market opening up, and the crack in the door being the modelling of flood, the firm is using big data and innovative means to enter the market. It has carried out ground- breaking work on modelling weather as a whole.

According to Aon Benfield global head of weather risk Kurt Cripps, the company’s new model is a game-changer.

“We are the only broker to place on a gridded basis. This refers to satellite, interrelated with ground-base data, buoys, weather balloons, aircraft and any other data available; we then take all the data sets and create a 3D model with the findings. As it is a 3D model, the height and distance can be set.”

The company has 100 years of data, rather than the 10 years of averaged data that is conventionally used, and also trending rather than forecasting.

This model allows for parametric insurance to be offered to those in flood-prone areas, using weather as an index.

With changing weather trends becoming a hot topic across the globe, and innovative models and products hitting the market, we are likely to see more involvement from the private sector. And in the US, September will be the tell for how large an opportunity the market will see there.