Why UAE economy is positioned for strong post-COVID transformation?

The UAE economy poised for a fast recovery from the impact of COVID-19 and an overall transformation, according to the Institute International Finance.

Although the economic recovery in 2021 is expected to be limited, the IIF believes it is going through some fundamental transformation that will help it its future growth

“We expect modest economic recovery in 2021 with real GDP growing by 2.3 per cent, following a contraction of 5.7 per cent in 2020. The recovery will be supported by the partial recovery in domestic demand and an increase in net exports. Our projections assume that the pandemic will be contained, and oil prices pick up to $52$/bbl in 2021,” said Garbis Iradian, Chief Economist, MENA, IIF.

The UAE has been largely successful in containing the spread of the virus despite the resurgence of infections in the recent weeks. Huge efforts in terms of testing and rapid vaccination programmes are expected yield tangible results in the near term.

“A relatively young population, improved testing, and better treatment of the virus in hospitals have kept the number of deaths in the UAE low,” said Iradian.

The reopening of businesses that started in September with most businesses authorized to resume, travel restrictions lifted, and international borders partially reopened, the economic impact is gradually tapering. 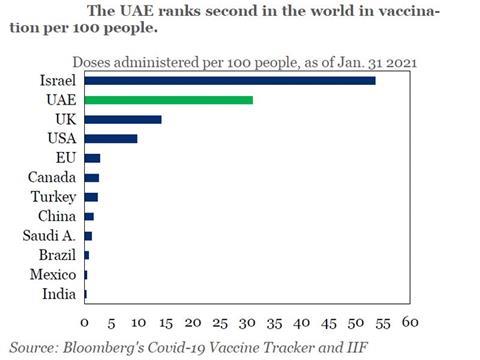 Data shows the number of tourist arrivals have picked up, hotel occupancy recovered to 70 per cent, and shopping malls and entertainment venues have remained open in Q4 2020. While the restrictions and social distancing norm are likely to fade as the infection numbers are expected to come down with the progress of the vaccinations.

The UAE’s coronavirus vaccination is the world’s second fastest after Israel. The target is to immunize more than half of the residents by March and 90 per cent by June.

The latest data flow suggests the economy is on the path of revival. The oil sector became a drag on growth as crude oil production declined by about 10 per cent due to the OPEC+ agreement.

The PMI data showed clear signs of improvement in December and January with jobs and output growth gaining momentum along with improving mobility.

The economic impact of the pandemic in 2021 is going to be limited on the UAE as consumers and business have found ways to adapt, thanks to the major progress made in digital transformation. Non-oil growth could accelerate to around 4 per cent by 2023, driven by further improvement in tourism and gains in productivity from the progress made in digital transformation.

The pandemic has highlighted the importance of digitalisation. Based on the World Economic Forum’s Index on Information and Communications Technology (ICT), the UAE has made major progress in recent years, and now ranks among the top 15 countries in the world. 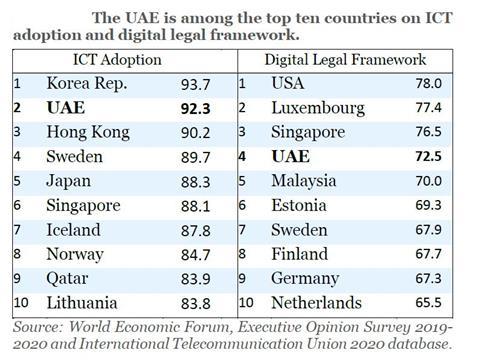 The UAE National Innovation Strategy prioritizes digital technology as one of the top seven national sectors, including the application and rapid adoption of new disruptive technologies across sectors (source: Deloitte). Policies that broaden digital penetration among low-skilled individuals have high potential to increase knowledge diffusion and productivity and mitigate skill shortages, including in the ICT sector.

Progress has also been made on promoting mobility. The UAE, in particularly Dubai, is among the top 10 in the world in developing new smart transport infrastructure and networks.

The progress in digital transformation has opened opportunities for small and medium size enterprises (SMEs) and offered the potential of enhanced productivity, which will enable the UAE to achieve sustainable higher growth over the medium to long term. Digitalization is gradually expected to make a greater impact on the UAE economy. The SMEs in the UAE have made digital technology an integral part of their business, thanks to the rapid growth of the e-commerce sector.

The banking system has remained relatively resilient amid the pandemic, helped by sound initial capital and liquidity positions and a forceful response by the CBUAE (which includes regulatory forbearance and liquidity support).

UAE Banks remain adequately capitalised with a 16.9 per cent Tier 1 ratio, while the nonperforming loan ratio edged up to 7.6 per cent in the third quarter of 2020. However, profitability challenges in the low-interest rate environment may limit banks’ ability or willingness to expand credit to the private sector. Measures encouraging banks to postpone loan repayment installments through June 2021 conceal the true extent of bank asset quality deterioration.
“Once the forbearance is lifted by the CBUAE, we could see significant deterioration in asset quality or a higher non-performing loan ratio. In this regard, most UAE banks started to take more provisions to prepare for further deterioration in asset quality,” said Iradian.

According to the IIF, Financial support programmes have been critical to sustain corporate credit, particularly to government-related entities (GREs). While banks’ credit to the private sector has declined slightly, it has been more than offset by the sharp increase in funding of GRE’s.

The Central Bank of the UAE (CBUAE) has reduced its policy rate by 125 basis points in 2020. Other measures taken include; halving of banks’ required reserve requirements from 14 per cent to 7 per cent; zero-interest rate collateralized loans to banks; 15-25 per cent reduction in provisioning of loans to SMEs; raising the limit on banks’ exposure to the real estate sector from 20 per cent to 30 per cent of risk weighted assets, subject to adequate provisioning; and allowing banks to defer loan repayments until end-2020.

“Given the lingering impact of the pandemic, the CBUAE is appropriately avoiding a premature winding-down of these measures, which were recently extended to June 2021. As the economy recovers, the focus of support needs to shift from liquidity provision to targeted measures that promote restructuring and solvency of several GREs,” said Iradian

With the objective is to better manage liquidity within the banking sector, the CBUAE has recently introduced a new securities issuance programme to financial institutions, called Monetary Bills (M-bills). Such securities will be auctioned and traded through Bloomberg’s primary and secondary market solutions and settled through a local platform, com-pliant with international standards, built and operated by Euroclear Bank. While credit to GREs continues to increase, credit to the private sector has stagnated.

The UAE government at both federal and individual emirates level have kept up spending during the pandemic.

The IID said the UAE should pursue a modestly expansionary fiscal stance in 2021 given its large financial buffers, spare capacity, partial recovery in oil prices, and downside risks to the recovery.

Based on the actual figures for the first three quarters of last year, the IIF estimates show that the fiscal deficit has widened from 1.2 per cent of GDP in 2019 to 7.3 per cent in 2020. Excluding profit transfers from the national oil company and sovereign wealth fund (SWF) investment income, the deficit would be around 14 per cent of GDP.

The decline in oil revenues, which accounts for slightly more than half of the consolidated total budget revenues, and the drop in non-oil revenues due to the deferral of some government taxes and fees, only partially offset the 7.5 per cent decline in total spending. Central government debt is still modest at 37 per cent of GDP. Including the debt of GREs, public debt is around 65 per cent of GDP.

“We expect that the consolidated budget spending for 2021 will increase by 4 per cent in real terms as authorities allocate more spending for healthcare (to around 4 per cent of GDP), raising targeted transfers to adversely affected firms, and accelerating public investment plans to support the recovery,” the IIF said.

The UAE’s strong external position has a big cushioning effect on the economy and the fiscal conditions.

The IIF’s estimates show that the current account surplus narrowed from 7.1 per cent in 2019 to 3.8 per cent last year as the sharp fall in oil exports and receipts from tourism outpaced the contraction in imports of goods and services.

Resident capital outflows, while declining modestly to $63 billion, continue to exceed nonresident capital inflows ($50 billion in 2020). As a result, official reserves have declined by about $10 billion to $97 billion by end-2020.

“We see the current account surplus increasing slightly in 2021 as external demand strengthens and oil prices pick up to an average of $52/bbl. The UAE remains the main regional destination of FDI inflows, attracting about $12 billion in 2020,” said Iradian.

Friendly business environment, excellent infrastructure, relatively diversified economy by regional standards, and political stability is supportive of FDI inflow according to the IIF.

The UAE has been taking deep economic reforms in the recent months that will have a huge impact on the future growth.

“The UAE authorities have set clear goals for encouraging diversified and knowledge-based growth to achieve a competitive knowledge-driven economy and are implementing a broad range of policies to achieve their goals. Such reforms will increase productivity growth and boost the supply of highly qualified labor, which is needed to raise potential growth,” said Iradian.

Foreign residents in the UAE represent at least 80 per cent of the total population and have been one of the main rea-sons behind the success of the Emirates in the past three decades. Late last year, the government introduced several changes in the Golden Visa Residency programme aimed at attracting experts and talented professionals from various fields. The authorities also introduced secular-leaning legal re-forms, with the objective to make the Emirates more attractive to highly qualified foreigners.

The latest in the series of reforms is the government’s decision to grant citizenship to foreigners with special talents is expected to attract huge diversified critical human capital.