Alternative capital and traditional reinsurance are getting closer, says Willis Re

Reinsurers look for ways to stay on top of the market 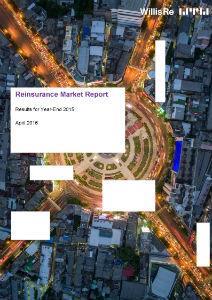 In its recently released Reinsurance Market Report, Willis Re stated that traditional reinsurance firms continue to launch alternative capital management platforms as a strategy to offset the challenges of a soft reinsurance market, but also as a way to “maintain presence and relevance”.

“A number of reinsurers have been able to maintain presence and relevance through new or alternative platforms. This included sidecars or ILS funds on whose behalf they underwrite”, said the report. It also added that “reinsurers alternative capital and ILS management ambitions are more than just a reactive response to market conditions, rather they are becoming key to remaining an important player in the marketplace.”

John Cavanagh, Willis Re global chief executive commented: “Given the current climate, the broadening of reinsurer business models is proving a successful strategy for many and increasing relevance to clients, despite the impact on expense ratios.”

Larger reinsurers, or those with something different to offer, have been better able to “defend renewals from a position of strength and depth of relationship compared to a number of their smaller peers which have been under greater pressure to diversify and compete more aggressively on price,” Willis Re report explained. It also claimed that “the boundaries between alternative and traditional reinsurance continue to blur.”