“Ugly duckling” parametric policies have the potential to evolve into the ”future of insurance,” according to Eric Schuh, chief insurance officer and chief financial officer at Element Insurance AG.

A parametric insurance policy insures a policyholder against a specific event, with the payout pre-set based on the magnitude of the event. The model has often been branded the “ugly duckling” of insurance – meaning it appears unpromising but could have great potential.

Speaking at a panel session entitled The Parametric Technologies Empowering Insurers to Combat Business Disruption on the first day (15 March 2022) of Insurtech Insights’ two-day conference at O2’s Intercontinental Hotel, Schuh said: “I can see a future where, in theory, you could use real-time data to create a parametric insurance solution for anything. This might sound like science fiction but in practical terms, there will be enough data.”

This data could be used, for example, to calculate the triggers and excess levels that are the backbone of parametric covers.

Schuh added that parametric insurance could possibly overtake traditional indemnity-based insurance: “In the future, we might be talking to a chat bot more often than a real person.

“A lot of people think of parametric insurance as a secondary way of solving a problem if, for whatever reason, it cannot be done the ‘proper’ way.”

In the Danish fairytale by Hans Christian Anderson a rather plain looking bird called the ugly duckling is born in a barnyard, but his siblings and the other farm animals vilify him for being so plain and ugly.

The ugly duckling flees from place to place only to be despised and judged by all those he meets because of his appearance.

When the ugly duckling has almost given up, he decides to throw himself into the path of some large swans to be killed to rid him of his misery, but is instead welcomed by the swans. The ugly duckling, now physically matured, catches his reflection in a pond and realises he has grown into a beautiful swan.

The story is intended to make the reader consider the opportunities missed by relying too heavily on negative first impressions.

”I think it’s the only blocker actually, if you can get rid of basis risk then nobody would ever buy traditional insurance products again.” 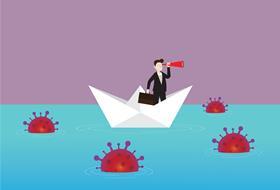 When Rimmer set out with his co-founder Ian Bartholomew to build FloodFlash the initial intention was not to build the current offering, an Internet of Things (IoT) centre focused on parametric flood policies. The motivation was simply that $70bn of damage was caused by floods every year, with less than 20% of that damage insured.

Rimmer continued: “The way to minimise the basis risk is to make sure your trigger correlates as tightly as possible with the risk. One of the reasons that flood has been one of the hardest things to produce parametric insurance for is because it is so difficult to get a trigger that does correlate.”

To solve this FloodFlash focused on two factors that correlated the most – cost damage from the flood and the depth of the water at the site.

The insurtech achieved this by developing its own sensor to measure the true parameter and obtain the data it needed.

Rimmer noted that 90% of business owners who did not reopen within one week following a catastrophe would close their doors permanently within a year.

“Our customers are not millennial technology adopters, they are small to medium business owners looking for affordable cover,” Rimmer added.

Meanwhile, there has been chatter of parametric insurance combining with traditional policies to create more hybrid policies.

Axa Climate’s chief underwriting officer Gwendal Pougnet added that now the foundations for parametric are in place it is time to consider it more mainstream.

“The future of parametric might possibly be hybrid,” Pougnet said.

Rimmer hoped that parametric policies would be rolled out to further customers, especially as climate change has become more of a concern with extreme weather events becoming more frequent.