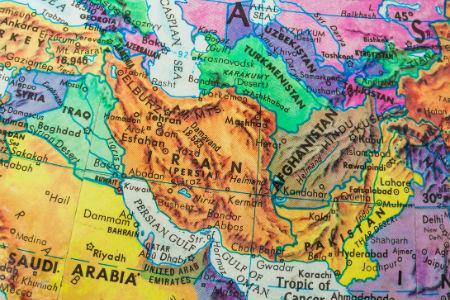 Tensions between two of the Middle East’s major powers, Iran and Saudi Arabia, have been well documented in recent years. Apart from the sectarian religious divide that separates them, both aspire to a hegemonic role in the region – particularly over the vital waterways of the Persian Gulf. Despite the election of the more moderate Hassan Rouhani in Iran in 2013, this economic and military rivalry has increased, and has contributed to the escalating violence in both Syria and Yemen.

While the security aspects of these conflicts currently seem intractable, the ratification of the Joint Comprehensive Plan of Action (JCPOA) between Iran and Western powers over the former’s nuclear programme, has the potential to radically alter the region’s long term economic dynamics. The lifting of international sanctions by several powers will provide a major boost to the weakened Iranian economy, which has greater non-oil potential, at a time when depressed global prices create major headwinds for the more oil dependent Saudis.

This is expected to have major consequences for the insurance industry as investment seeks out more conducive business environments, greater overall economic opportunity and safer markets from a region roiled by political risks.

According to the International Monetary Fund (IMF), Saudi Arabia is the 19th largest world economy in terms of GDP, but 30% of this is generated by oil, which also provides 80% of government income. Revenue from this sector has been used to support agriculture and other industries, including iron and steel, construction materials, food processing, engineering, chemicals and metal fabrication. The drop in global oil prices, to approximately $40 a barrel in 2016, has exposed the Saudis to major economic stresses including a deficit equal to 15% of GDP and a collapse in foreign investment reflecting investor apathy in the face of falling energy revenues.

The traditional Saudi response to boost the economy in a period of low energy prices has been massive state intervention, but the fiscal space available, given existing commitments and expanding security costs, will limit large scale infrastructure investments. Moreover, plans to stimulate the private sector with a $400m privatisation programme will likely be affected by political considerations, including maximising employment and wages for nationals. It is therefore unlikely the country’s dependency on hydrocarbon exports will be reduced in any meaningful way and real growth will be an anaemic 1.1% in 2016.

Iran’s trajectory, by contrast, will see strong upward growth as its economy benefits from the partial lifting of international sanctions and the unfreezing of USD 50bn of Iranian funds held in international accounts providing badly needed investment. Iran’s economy is ranked 28th largest in the world and while growth also remains dependent on oil and gas, which account for nearly two thirds of revenues, it is less dependent on oil than its Gulf counterparts. Iran’s long period of isolation from international markets has encouraged the development of other industries, notably auto manufacturing and agriculture; making the country a major source of warm weather foodstuffs. External capital, much of it from the European Union, China and Russia will be available to upgrade infrastructure in the energy, transport and water sectors.

The development of the Iranian service sector, due to international restrictions on its energy industry, is expected to have a positive impact on the economy in the long term, as will its highly skilled, competitive and motivated workforce, which again stands in contrast to many of its regional oil exporting peers. Real GDP was projected to expand by 4.5% in 2016 and by 5.4% in 2017 as consumption rises following the withdrawal of sanctions.

These differing trajectories are also represented in the development of insurance markets.

Gross written premiums in Saudi Arabia totalled $8.1bn in 2014 (the last year for which there are complete statistics). Penetration in health is inevitably significant since it is compulsory in Saudi Arabia for expatriates and Saudi nationals working in the private sector. With regards to PA and health insurance, Saudi Arabia is 20th in the world. Despite the relative size of its economy, however, non-life insurance penetration in Saudi Arabia remained low at 1.09% in 2014, with motor the only class demonstrating any traction.

While Saudi non-life companies are upbeat, as they consider their reserving very conservative, and encouraged by the decision in January 2014 to make third party liability insurance mandatory for all factories handling hazardous materials in suburban areas, there is little sign of a major upswing. The hampering of the overall economy by low oil prices and continued restrictions on foreign companies (branches of foreign companies are not permitted in Saudi Arabia) mean growth is most likely to benefit the five biggest carriers who already dominate with approximately 60% market share. Smaller companies will prove unable to break into the undiversified market and continued premium price competition will see many squeezed out.

In Saudi Arabia, Foreign participation in private insurance companies is currently limited to 20%

Iran’s smaller economy, even after years of international sanctions, has an insurance market of comparable size, with gross written premiums of $8bn in 2014. Premium growth was 27% in the same year, with the life and PA sectors performing particularly strongly; liability coverage also figuring prominently. While some of its impressive expansion can be attributed to high rates of inflation, it also reflects innovation within the Iranian insurance sector with regard to coverage of complex projects such as refineries, airports and shipping given the end of foreign insurance and reinsurance capacity in 2012. The implementation of the JCPOA from 2016 and lifting of EU sanctions relating to the provision of reinsurance means foreign capacity may be available by late March 2016, when the Persian calendar year ends and many (re)insurance contracts renew.

Foreign participation in private insurance companies is currently limited to 20%, but it may be increased to a maximum of 49% with the permission of the High Council of Insurance and the Council of Ministers. Foreign insurers are also able set up contact offices in mainland Iran following amendments to previous regulations, which authorised the operations of foreign insurance companies in the free trade zones.

This comparison suggests that while the Saudis may have a larger and more established market, the conditions for a take-off are stronger in Iran, assuming its relationship with the international community continues to improve. Its relationship with the US in particular remains in the balance. The bulk of US sanctions are still in place and payments in US dollars are still prohibited so questions remain about whether foreign insurers will be able to operate in Iran without facing penalties from US authorities. The test firing of two Iranian ballistic missiles in March 2016 provided a reminder that relations with western powers remain tense and the collapse of JCPOA would threaten EU investment.

Moreover, the rivalry between Iran and the Gulf monarchies continues to run the risk of erupting into open conflict. Despite the opening of multiparty peace talks on the Syrian conflict and tentative negotiations between the Saudis and the Iranian backed Yemeni Houthis, flash points remain over growing Iranian influence in Iraq, the status of the Shia minority in the Kingdom of Bahrain and the political future of Lebanon. Despite growing opportunities investors eyeing the Persian Gulf will likely remain wary for the foreseeable future.