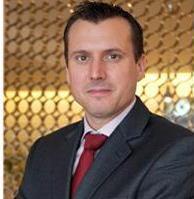 Lloyd’s has announced that Mark Cooper has been appointed as the market’s first country manager for Dubai.

Cooper will head up Lloyd’s new operation in the Dubai International Financial Centre (DIFC) and joins from the DIFC where he is currently sector head, insurance, reinsurance and captives.

Back in January, GR exclusively revealed that Lloyd’s was planning to open up a branch office in Dubai

In his role at Lloyd’s, Cooper will manage the platform and support managing agents in developing their business across the wider Middle East and North Africa region. Currently, eight Lloyd’s managing agents have signed up to participate on the Lloyd’s Dubai platform: Amlin, Argo, Liberty, Markel, Navigators, Pembroke, Talbot and Watkins

Cooper, who has been operating in the region for a number of years including senior roles at RSA and Zurich, spoke last week at GR’s Executive Briefing Live event at the DIFC. He will officially start his role in February 2015.