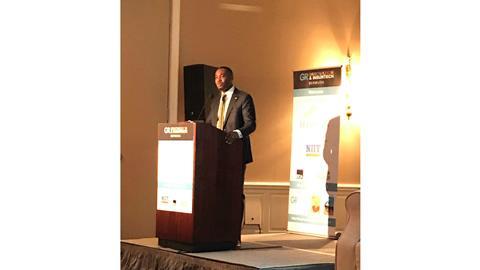 The Bermuda Premier, The Hon. E. David Burt, demonstrated his commitment to innovation today by stating that Bermuda would establish a technology hub, during his keynote at the inaugural Global Reinsurance Innovation & InsurTech Bermuda event.

Hon David Burt said twice during his speech – which he noted was not scripted – that: “Bermuda understands, and the Bermuda government understands, what lies ahead for the future, and the future is in InsurTech.”

Hon David Burt is no stranger to innovation. As well as being Bermuda’s youngest ever premier, Burt has made waves in the technology sector. An entrepreneur, Premier Burt started GMD Consulting Limited, an IT consulting company focusing on project management, for which he was president from its inception.

To add to this, Premier Burt co-founded and was the lead developer for Hitch Mobile App, an Uber-esque service that enable Bermuda residents to hail taxis.

The Bermuda Premier opened the Global Reinsurance Innovation & InsurTech Bermuda event with his progressive stance. The event is the first of its kind on the island and received considerable attention from those on the island and around the world.

He stressed in closing: “We want to be the leading edge in insurance.”