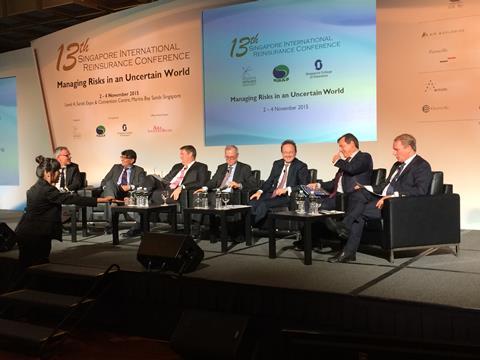 The emerging Asia market was today described as the fastest growing reinsurance market in the world by Munich Re board of management member Dr Ludger Arnoldussen, though the region still faces an uphill climb.

As part of the executive panel discussion at this year’s Singapore International Reinsurance Conference (SIRC), Arnoldussen acknowledged the penetration gap in the emerging Asia market, but said: “We will see the fastest growing reinsurance market, and reinsurance region, around the world is emerging Asia.”

This sentiment was echoed by fellow panelist Lloyd’s global markets director Vincent Vandendael, who described low penetration in the emerging Asia market as being both a key challenge and a huge opportunity.

Vandendael said: “The insurance penetration rate in this part of the world is only 1.4%. Indonesia is 0.4%, India is 0.6%. Clearly they’re opportunities, but they start from a very low base and there are challenges.”