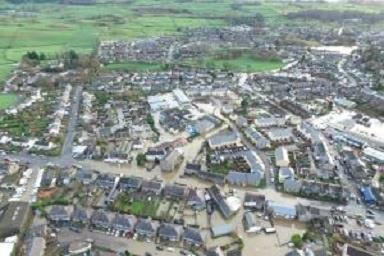 The economic cost of the three winter storms Desmond, Eva and Frank could breach £3bn, according to PriceWaterhouseCoopers general insurance leader, Mohammad Khan.

But, according to a report in Insurance Times today, Shore Capital analyst Eamonn Flanagan feels the losses are not enough to spark a rise in premiums.

Insured losses from the winter storms Desmond and Eva are set to reach £900m to £1.2bn, out of total economic losses of £1.6bn to £2.3bn, according to Khan. And once the cost of Storm Frank is calculcated, the total economic cost of the three storms could breach £3bn, he said.

The bulk of the losses caused by Desmond and Frank are likely to emanate from the household account, with commercial insurance, including business interruption, likely to account for a significant part of the losses from Eva, which hit major parts of Leeds and York, Flanagan said.

And he said these losses are not yet sufficient to push rates upwards across the country.

“The December 2015 flood losses aside, the UK household insurance industry has benefited from fairly benign winter losses in recent years and, by and large, from the absence of material recession related losses,” he said.

“As a result, reserves levels remain robust thus obviating the need to push rates higher. In addition, we note that competition remains intense with a steady flow of new players willing to join the fray, the latest of which is Hastings.”

Losses from the individual companies should emerge in the coming weeks, but Flanagan forecast some of the likely impact on listed insurance companies.

Direct Line has a market share in UK household insurance of 17% and in UK motor of 14%, with a fairly high retention of about £150m, Flanagan said, adding that a loss of this magnitude would compare to Shore’s current 2015 operating profit of about £600m. In addition, the group is likely to be exposed within its motor and commercial books, with the latter emanating from the NIG book.

RSA’s retention has been set at £75m. UK household accounts for 9% of the group’s total premiums, although losses from within its motor and commercial books are also quite likely.

Aviva has a pretty high retention level, set at about £300m, with UK household business estimated to account for 6% of the group’s premiums.

Other quoted players which are likely to be affected, to varying degrees, include: Legal & General, Hiscox, Admiral and esure.