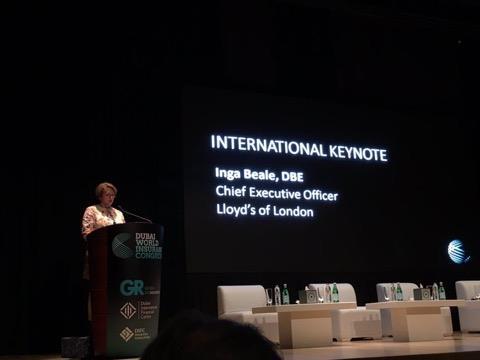 Inga Beale has voiced her concern the industry is “sleepwalking” into the new world and failing to adapt to disruptive threats at the pace of which the global risk landscape is changing.

Beale urged the audience “to be fully aware of what is going on around us”, with the rise of new economies and technology as key factors shaping the insurance industry.

“New technology is transforming the way we work, and it is allowing the competition to do it better than we can,” she said.

In her speech, Beale cited statistics which show the amount of venture capital money raised by insurtech companies over the last three years as reached $13bn.

“Even if this isn’t the full picture, it’s an indication of the scale of competition we face,” she said.

“The strange thing is we know the urgency and yet there is inertia,” she added.

While recognising the significance and progress being made on some of the core initiatives which make up the London Market’s Target Operating Model as “crucial first steps”, Beale is concerned the sector is not adapting or innovating fast enough.

“While we work out how to sort out electronic placing in the London market, start-ups around the world are investing billions in how to fundamentally change the way insurance is sold, how claims are assessed, how risk is commoditised, how distribution can be lower cost – in other words, how the entire industry can be changed,” she said.

However, Beale can see the possibilities new technologies can offer – particularly in the advancements in artificial intelligence and its link to automation, data collection and analytics.

“This is just the start,” she told the packed audience. “The point of change is happening so fast that if we don’t embrace new technology, we will find ourselves trapped with legacy systems that are too slow and cumbersome to compete.”

But “pockets of resistance” still heavily reside in the London Market in particular, and this continues to be a challenge, according to Beale.

The opening up of new markets and the opportunities that go hand in hand with this also dominated much of Beale’s speech, “but access is becoming increasingly challenging”, she said.

Indeed, closer to home, Brexit has been just one of these challenges with Beale viewing this as an example of the “rise in protectionism we are seeing in some markets around the world”.

Lloyd’s now has a shortlist of locations for its subsidiary model – the corporation’s preferred trading option – and Beale reaffirmed during her speech its first choice will be announced by the end of Q1 2017.

But the shift in global economies of strength is also an area Beale is keen to focus on.

Inspired by a speech delivered by Chinese president Xi Jinping earlier on this year at Davos during the World Economic Forum, and the momentum behind China’s long-term strategy, Beale asserted the “old world order with the US and other established markets is changing”.

“The successful economies will be the ones that adapt best to the new world order, overcome the challenges and take advantage of the new opportunities,” she said.

Beale applauded the Middle East as a region where change is underway.

“Since the oil price shift, there has been an accelerated programme of major economic diversification here, with technology and innovation at the heart of it,” she said, citing plans for the Hyperloop One Transport and recently announced Fintech accelerators as “excellent examples of this”.

According to Alpen Capital, the Gulf Cooperation Council’s insurance non-life sector is set to grow by a compound annual growth rate of 14% to a total of 49 billion dollars by 2020.

“Our own experience at Lloyd’s Dubai bears this out,” she said.

Since launching its platform in March 2015, Lloyd’s premiums in Dubai are growing by 30%.

The potential opportunities from the growing construction and infrastructure pipeline in the Middle East has not gone unnoticed, as Beale announced plans to further expand in the region.

In addition to three coverholders in the DIFC, plus a coverholder each in Jordan and Bahrain, Saudi Arabia and eventually Iran are of interest to Lloyd’s, according to Beale.

“A growing middle class; high rates of technology adaption that will allow deeper insurance penetration; the insurance needs of [several] vast construction initiatives all suggest that emerging markets are going to be where the serious action is,” she said.