With low rates and an abundance of capacity, reinsurers knew they would inevitably feel the squeeze - but how did the industry respond? 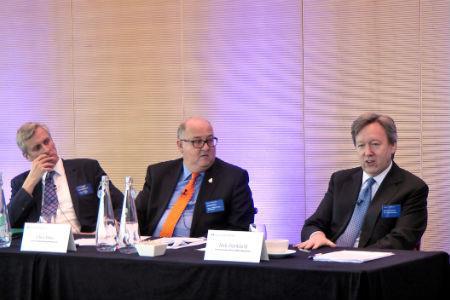 This year’s renewal season saw a slowing in the decline of rates – down on average 8.8% at 1/1 renewal, against an average decline of 11% in both 2015 and 2014 – and global reinsurance capital remained unchanged at $565bn, just 2% down on last year. While a complete return to form is not yet on the cards for the industry, the predictability of the season did offer some comfort.

Speaking at a press briefing for the 1/1 reinsurance renewals, Guy Carpenter chief executive of EMEA strategy management Nick Frankland described the season as orderly and stable, saying: “It performed very much as we predicted at Baden Baden.”

Below the surface, however, the growing divide caused by tiering and the impact of alternative capital was evident.

Speaking at the same briefing, Guy Carpenter head of EMEA strategy management Chris Klein said that reinsurance tiering had been more noticeable this renewal season than in previous years, saying it was is “a particular feature of casualty”.

He added: “We saw preference being given to reinsurers that were able to write across a cedent’s entire book of business, which by its nature tends to favour those reinsurers that have the scale and ability to operate in that way.”

Frankland added that cedents continued to buy around their core panels. According to Frankland, they built their cover around “reinsurers they had the widest and longest relationships with and were most invested with, and then look beyond to see what they need at the edge of that”.

He said that this approach would continue to drive M&A activity among reinsurers outside of the top 20 firms that wish to gain positions of greater relevance on panels, though M&A was not likely to sustain the levels of activity reached in 2015 he added.

While the last 12 months saw prolific M&A activity, it did not cause reductions on either side of the table. Frankland said: “At renewal, consolidation did not reduce capacity – in fact it did not reduce reinsurance buying either. The large groups that consolidated continued to buy reinsurance to protect their investments going forward, and where they combined as reinsurers they continued to put out similar if not larger capacities off the back of their larger capital bases.”

Both Guy Carpenter and Aon Benfield reported on the stabilisation of reinsurance capital. After two years with a compound growth in capital of 8%, this year saw capital decline by 2%.

For some lines, however, the influx of alternative capital affected renewal dynamics. Willis Re outlined in its 1st View Report that for global specialty markets, particularly within aviation and energy sectors, large losses and reductions in original rates did not stem the inflow of additional capacity.

Aon Benfield also highlighted that alternative capital remained “impactful” to the overall market for risk transfer, as half of the $69bn property catastrophe reinsurance capacity in 2015 still came from alternative capital – reinsurers were having to work smarter to hold on to clients’ risks.

Aon Benfield estimates that alternative capital will reach between $120bn and $150bn by 2018.

According to the Aon Benfield Reinsurance Market Outlook 2016 report: “Leading reinsurers invested heavily in skills and processes to allow more of our clients’ risks to be managed in the reinsurance market.”

Aon Benfield also maintained its estimate that alternative capital would reach $120bn by 2018.

Given the squeeze on margins seen at this year’s renewals, 2016 is set to be a challenging year for much of the industry – the growing influence of tier 1 reinsurers and the abundance of alternative capital are both likely to also heavily impact the market.