The changing face of insurance technology

GR event debates the present and future of insurance tech 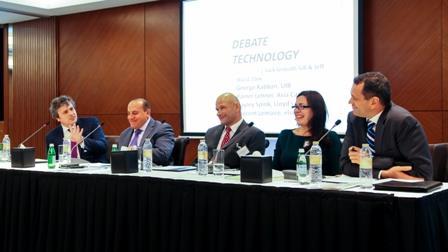 Technology in the (re)insurance industry is widely accepted as an enabler for improving business efficiency, but many practitioners are still fearful of how new solutions will change their roles, according to a panel of speakers at a recent GR event in Dubai.

The session began with the panel considering the current level of technology being used in the region’s (re)insurance markets.

Kabban said that he saw technology as an enabler.

“There isn’t’ a single product out there to meet the requirements of everybody,” he added. “It is a challenge. But if we as an industry do not come to grips with it then we risk running our businesses at an inefficient level.”

Spink said that it is possible for technology uptake to be successfully promoted by market organisers, and gave the example of the way Lloyd’s has promoted electronic endorsements.

“Another example is electronic claims filing, which was greatly resisted by the claims side of the market,” she added. “At first people didn’t want it. Now, a number of years later as people have worked out how it makes their work more efficient, we wouldn’t be able to take that away from them.”

The conversation then moved on to the driver for market centres such as Lloyd’s to adopt technology systems for their members’ use.

The demand for such initiatives in the market comes from those people that focus on the financials, she added: “If you look at the people who look at the bottom line, they see where the efficiencies are going to be.”

Lemaire said that his organisation had already seen the financial benefits of technological upgrades.

“On a daily basis I see the benefit of technology now,” he said. “Am I for or against it? I don’t see it that way. It is something that is there. Some parts are good, some parts are bad. We have to manage it.”

Lehner said that Asia Capital Re had also seen such a benefit. “I think when you look at the volume we handle today, it is unimaginable how it was done ten or 20 years ago, before computers,” he said.

Ward then moved the debate on to the question of whether technology could help smooth the relationship between underwriters and brokers.

Kabban said that this depended on the nature of the insurance business being done. “What we do at our end of the spectrum is by definition customising solutions to meet clients’ specific needs,” he said. “For commoditised products, it is a bit easier to have technological solutions.”

Ward noted that this highlighted the need for such technology to be flexible, and asked Spink how Lloyd’s had coped with that, or whether the market was ignoring it.

“We haven’t ignored it, but we’ve struggled over a number of years,” she said. “Technology is not a magic wand, it doesn’t solve everything. It’s an enabler.”

The trick was to find precisely the right parts of the process where technology can help, Spink went on.

She added: “I think there is a fear factor that technology will come in and take a lot of peoples’ jobs. There needs to be a lot of care taken about how you actually put technology to better use, rather than think you can just pay for it and people will use it.”

The underlying movement of data in lines such as motor and marine was a big requirement for Lloyd’s current technological solutions, she said. “For more complicated risks, it was used a lot less,” she said.

Technology can also give a competitive advantage, Lemaire said. “For us, technology has been very helpful in gathering information on clients, knowing exactly who they are,” he explained. “It’s also been very helpful on the pricing and admin side.”

But Lemaire noted that the role of the underwriter was not under threat, as some believe. “Underwriting, especially for specialty lines, does require a lot of human input, so technology can’t do it all,” he said.

Lehner said that the lack of profitability in the reinsurance market would lead to more commoditisation, and, in turn, more use of technology. “Technology will help us achieve that by having a standard platform,” he said.