Swiss Re stands out as the only reinsurer at this year’s Rendez-Vous de Septembre to have taken significant steps to reduce its carbon footprint.

Gone is the reinsurer’s usual Pavilion, and the company sent fewer staff to the Principality as part of a concerted effort to practice what it preaches.

“It was a very conscious decision on our part,” Moses Ojeisekhoba, chief executive, Reinsurance at Swiss Re, told Global Reinsurance. “We are reducing our carbon footprint relatively aggressively – we are not just talking about it.” 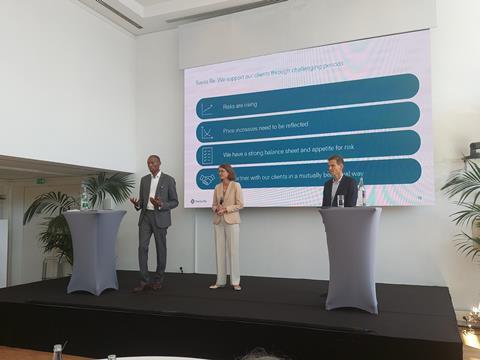 The impact of climate change is ‘arriving very clearly’ in secondary perils. This is according to Thierry Leger, group chief underwriting officer at Swiss Re.

He pointed to the examples of extreme weather witnessed around the world so far in 2022 – including droughts, wildfires, floods, and heatwaves – as having global importance.

“It’s difficult to explain why this has arrived now but there must be a material adjustment to take these increased exposures into account,” said Leger.

“It’s the fact they are not one-off events anymore,” added Ojeisekhoba. “Clearly the world is far more uncertain from a risk standpoint.”

Leger explained that it was not just a warming climate which is responsible for the growing impact of natural catastrophe losses.

Increasing wealth and urbanisation are other factors that are increasing the exposure of assets at risk from natural perils.

A cautious approach to cyber

While catastrophe risk is relatively tangible, with a long loss record and relative ease in pricing and underwriting the risk, cyber is quite different.

The challenges surrounding systemic risk and the lack of test cases on certain wordings – including war and catastrophe exclusions – means it will take time for the market to achieve its potential.

As a result, Swiss Re is under-weight in the class, currently representing around 5-6% of the total cyber re/insurance market, of which around 80% is in the form of reinsurance protection.

Ojeisekhoba likened the current state of the market to the elimination of ‘silent cyber’ from property policies a few years ago. “You’ve got to ensure an event doesn’t threaten the solvency of a company or the industry,” he said.

“The industry is trying to provide capacity, but the exposure being taken on must be adequately understood and priced.”

Leger acknowledged the market needed to grow but said that profitability had to improve. “If we want to be relevant as insurers, we need to provide far bigger capacity than we do today.”

He pointed out that the cyber insurance market’s combined ratio was consistently above 100%, even in years where loss activity had been relatively benign.

To gain more support from reinsurance partners it needs to be closer to 85% COR in nine years out of ten, he thought.

But Leger was upbeat about the market’s potential – assuming current challenges can be overcome - anticipating it could rival the property market by 2040.