19
Cyber newcos are seeding the pipeline, reveals AM Best
Home

Cyber newcos are seeding the pipeline, reveals AM Best

There is significant opportunity to innovate as the risk landscape evolves, but reinsurers are taking a more conservative approach to risk

There is significant opportunity for reinsurance markets, with demand for risk mitigation growing as cedants are faced with an increasingly volatile and intangible risk landscape.

This was the conclusion of analysts at AM Best as they presented a market briefing to officially kick-off the Rendez-Vous de Septembre in Monte Carlo.

From supply chain disruption due to the pandemic through to the impact of the War in Ukraine and resulting secondary risks, including rising energy prices, inflation and state-sponsored cyber attacks: The underlying market is looking for solutions and the market needs to innovate. 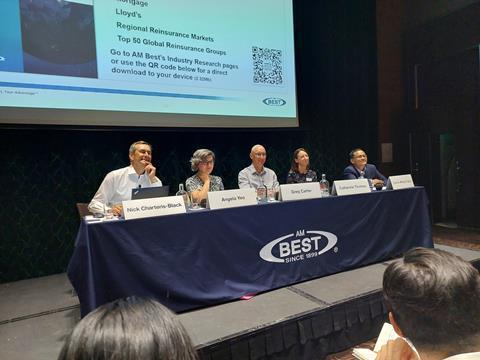 But is the reinsurance industry rising to the challenge? When probed by journalists, analysts submitted that the industry’s concerned around systemic risk had led to retrenchment, the introduction of blanket exclusions and a reduction in appetite.

Pronounced supply, demand imbalances are continuing to drive up rates on line, maintaining the hard market and benefitting reinsurance players in the near-term. But this may mean they miss the opportunity to provide meaningful solutions to ensure the market grows and stays relevant longer-term.

Thomas acknowledged that while the market needs to innovate, there could be an initial knee-jerk reaction instead. “There is concern that by putting exclusions [into policies] this leads to protection gaps and underinsurance,” she noted.

The cyber insurance market is one that has yet to achieve its full potential and there has been significant captive growth, as corporates have opted instead to self-insure.

“It is an example of history repeating itself,” said Angela Yeo, senior director of analytics and head of operations at AM Best. “It’s just as we saw following 9/11 where the terrorism market’s reaction was to introduce exclusions. The cyber market will develop though, as it is an attractive risk.”

And there could be some light at the end of the tunnel. Stefan Holzberger, chief rating officer at AM Best noted there are currently three new companies dedicated to cyber insurance in the pipeline, which are seeking a rating.

The shift away from property catastrophe risks has continued to accelerate over the past 12 months.

“The concept of a pure reinsurance companies specialised in catastrophe risks is becoming more rare,” said Carlos Wong-Fupuy, senior director, Global Reinsurance Ratings, AM Best. “Companies are having more diversification in their book of business.”

Major catastrophe losses since 2017 have led many reinsurers to reevaluate their exposure to property catastrophe business, particularly in lower layers where losses are more likely to attach. Flood and other so-called secondary perils are receiving more attention.

”Reinsurers are pulling back from natural catastrophe,” added Holtzberger. ”In particular from the working layers within property treaty accounts where the losses have been sustained.”

“The prospect for profitability on natural catastrophe business is there,” he continued, “but it’s about having the discipline to pull back from the working layers.”

Tactics are varied. Some have increased their participation in specialty and casualty excess and surplus lines of business. Others are taking a more proprietary view of catastrophe risk and relying less on catastrophe model output.

The industry remains well capitalised, but available capital does not necessarily translate into dedicated capital, noted Thomas. “We see capital overall being deployed prudently and selectively,” she said.

Four months ago there was the anticipation that inflation would be short lived - a by-product of the pandemic and supply chain crisis.

Now, with the geopolitical and economic landscape shifting, the War in Ukraine contributing to an energy crisis in Europe, the rating agency analysts said reinsurance companies are having to adapt to a very different scenario.

Inflation will be an issue for longer than anticipated, impacting loss costs (as the cost of claims increases), social inflation and potentially causing an uptick in claims frequency.

Greg Carter, managing director of analytics at AM Best, indicated reserve releases could be a thing of the past.

He noted that releases in the past two years had been somewhat artificially impacted by the COVID-crisis, with re/insurers taking a cautious approach to reserving for pandemic losses and hence being in a position to boost results with releases as the claims failed to materialise.

Meanwhile, the moves taken by Central Banks to bring inflation under control by increasing interest rates (with the US Federal Reserve indicating rates may need to go as high as 7%) are likely to have a more favourable impact on investments longer term.

Returns on the asset side of the balance sheet will improve over time, but there is unlikely to be a return to the Wild West cash flow underwriting conditions of the past, thought the analysts.

Meanwhile, a higher interest rate environment could cause institutional investors to seek returns elsewhere. It comes at a time when capital market participation has somewhat plateaued, observed Holtzberger.

This is a result of issues such as trapped collateral (down from around 20% of capital in the ILS sector to around 15%), loss creep (particularly in the aftermath of Hurricane Maria) and a reevaluation of the accuracy of the catastrophe models.

“It’s not that ILS players are going to reduce their participation significantly,” said Wong-Fupuy, ”but that investors are going to be more cautious on how they deploy capital.”